Germany – often dubbed the Land of Ideas – has lots of good ones. Industry-leading cars? Sure. Delicious beer? Absolutely. But watches? Isn’t that a Swiss thing…?

It shouldn’t really come as a surprise that Germany has a thriving watch industry right now. Aside from being a fastidiously punctual bunch, the Germans are no slouches when it comes to precision engineering and design, and – this one’s especially important – they share a border with Switzerland.

But it’s in the Black Forest town of Pforzheim, closest to the French border, that Germany’s watchmaking pedigree has its origins. Today, almost three centuries after it first emerged as a hub of jewellers and component-makers, Pforzheim is home to the Stowa brand, one of several long-established German companies enjoying a resurgence. And just a couple of hours’ drive away in Schramberg is Junghans, founded in 1861, which has also recently released a flurry of fresh designs.

The real catalyst for German watchmaking, however, came in the mid-nineteenth century when a man called Ferdinand Adolph Lange began making timepieces in Glashütte, a tiny village near Dresden in eastern Germany. His company, now known as A. Lange & Söhne, is owned by the mighty Richemont Group and sits comfortably alongside the likes of Patek Philippe and Vacheron Constantin in the pantheon of high-end watchmakers.

Regarded as the spiritual home of German watchmaking, Glashütte has a watch company on virtually every street and even boasts its own museum of horology. Indeed, the very word ‘Glashütte’ is now synonymous with quality (a maker can only put on the dial if at least 50 per cent of the watch’s movement was made in the village).

While the German watch industry will probably never be as big as its Swiss neighbour’s – it tends to focus on the mid- to high-end sector, for a start, and has no Swatch-style mass-market manufacturer – it is showing signs of more robust health.

Germany’s watch exports in 2015 showed a 14 per cent jump, while Switzerland’s fell 3.3 per cent, according to government data. Last year, Glashütte alone produced 32,000 watches with a total value of at least €500 million.

Cars, football, beer… one day the Germans might actually discover something they’re not good at.

This unsung gem of a company, based in Pforzheim, made some of the original ‘flieger’ watches worn by Luftwaffe pilots in World War II, and it’s this historic model that still encapsulates the brand today.

Apart from the price (you can pick up a Flieger for well under €1,000), the best thing about Stowa is that it offers some nifty customisation options including engraved cases and rotors. And you can also choose between an automatic or hand-winding movement.

Try the Flieger Klassik Sport. It’s as robust as a Panzer tank and those prominent blued steel lozenge-shaped hands are the icing on the stollen. Huge within Germany, Junghans is best known for its Bauhaus-inspired Max Bill range.

It’s not all understated minimalism, though. Released at Baselworld earlier this year, Junghans’ two-tone dial Meister Driver Handaufzug harks back to the classic cars of the 1930s, its retro appeal enhanced by its 37mm case size and Plexiglass crystal.

The brand does a nice line in sporty retro chronographs, too. The 1972 Chronoscope Quartz, with its large cushion case and racing strap, looks the business in red and black. Helmut Sinn was a German pilot who in the 1960s found that few timepieces met the demands of his profession. So, naturally, he decided to start making them himself, founding his eponymous brand in 1961.

Today, Sinn is best known for its utilitarian divers and pilots watches, which are worn by, among others, the marine unit of the German police force. A couple of German astronauts – including Dr Reinhard Furrer and Klaus Dietrich-Flade – have even worn their Sinns in space.

A quintessential model is the uber-rugged Model T2 in bead-blasted titanium – the kind of thing you’d pack for a polar expedition. This Glashütte-based company, founded in 1990, makes its own movements, yet the starting price for a Nomos is just £1,000 – a far cry (or yodel) from the staggering price points its Swiss counterparts retail for.

The brand mixes Bauhaus-style austerity with an element of fun, as epitomised by the Metro Datum Gangreserve, whose mint green and red power reserve indicator purposely throws the sparsely decorated dial off-balance.

No one makes watches like Nomos, and the fact that they’re a small new company thriving in the midst of the venerable ‘old guard’ of German watchmaking only adds to their appeal.

For an entry-level Nomos, take a peek at the no-frills Club Datum model. 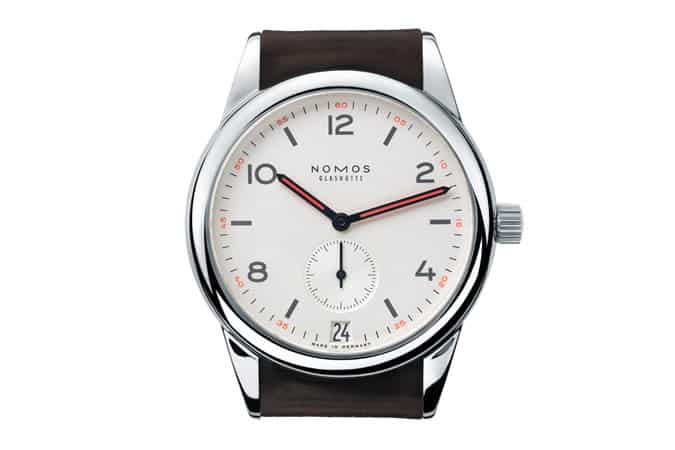 A. Lange & Söhne is the granddaddy of Glashütte. The company that spearheaded the village’s watchmaking revival in the 1990s (after a dormancy triggered by WWII and the division of Germany), it’s since then been producing not only some of the best timepieces money can buy, but turning the movements themselves into intricate works of art.

Its celebrated ‘Zeitwork’ model is known for its innovative digital display, while the elegantly appointed ‘1815’ range adheres to convention.

Strictly for the connoisseurs, even an entry-level A. Lange & Söhne – like this 1815 – starts at £17,000. Which means it might be time to start saving like the Germans, too.