The case remains the massive 42mm diameter/17.5mm thick one used in the regular ROO Diver. Even the black ceramic crowns are the same. Two additional ceramic pushers does duty for the chronograph. The iconic octagonal bezel with white gold hexagonal screws in their hexagonal countersinks has great presence. As with the other ROs and ROOs, the screws are not actually driven into the case from the bezel side, but fastened from the other side by tightening the corresponding nut. The case is rated to a depth rating of 300m, and is a serious dive watch with an ISO rating.

As with the ROO Diver, a crown at 10 o’clock operates the outer chapter ring which works as a dive bezel. Turning only in one direction so one can decrease the indicated dive time, but never increase it, it features a bright yellow section fron 0-15 marking the critical last 15 minutes of dive time. The Green and Orange versions have this section in the same green and orange as the dial and rubber strap, and the Yellow version is the same as the Blue with a yellow section. 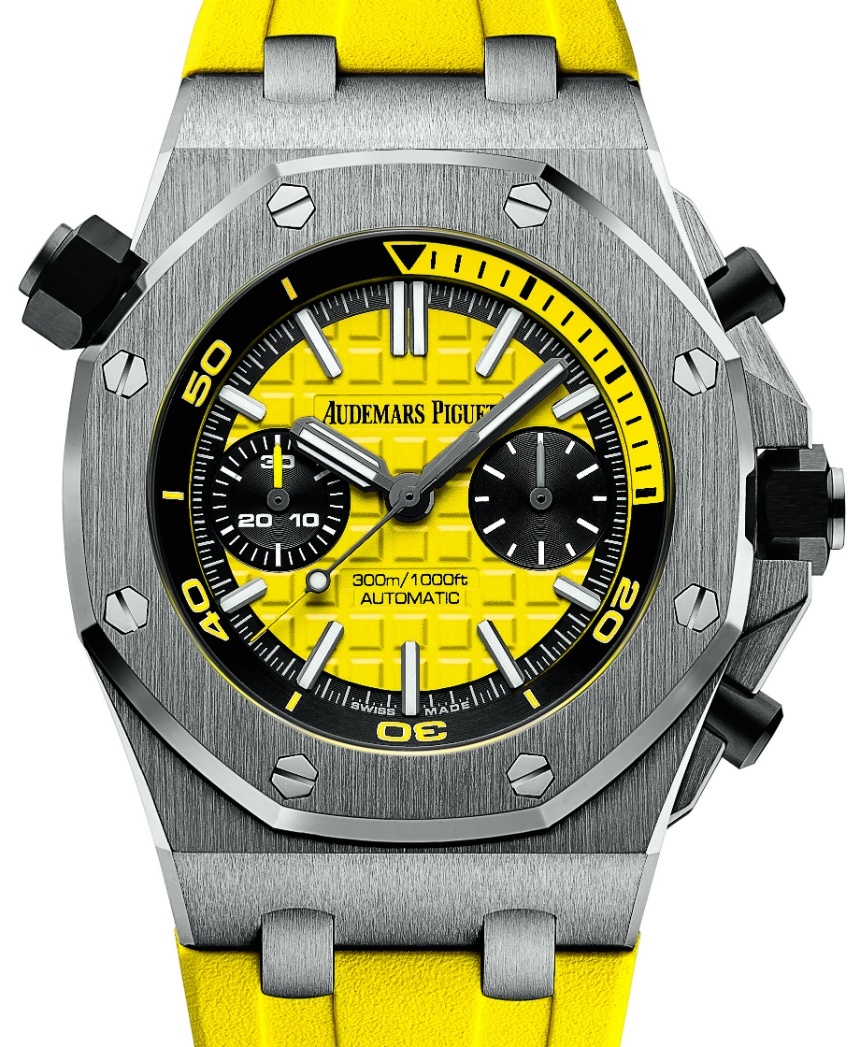 We note that some divers have commented that the location of the rotating bezel’s crown at 10 is awkward to use underwater. To reach it when the watch is worn on the left wrist requires a difficult twist of the right hand. This was observed in the original ROO Diver, and AP carried this arrangement over to this ROO Diver Chrongraph.

The dial carries the same Mega Tapisserie pattern as the regular Diver. Interestingly due to the movement used, the AP 3124/3841, it features dual counters in a bi-compax arrangement. The earlier ROO Chronographs used a different Dubuis Depraz module, which have the typical 12/9/6 sub-dial arrangement. Dial legibility is excellent, as is expected of a serious dive watch. This dial layout is quite remarkable, as it does not add any additional clutter to the original Diver dial, while adding a very useful chronograph feature. 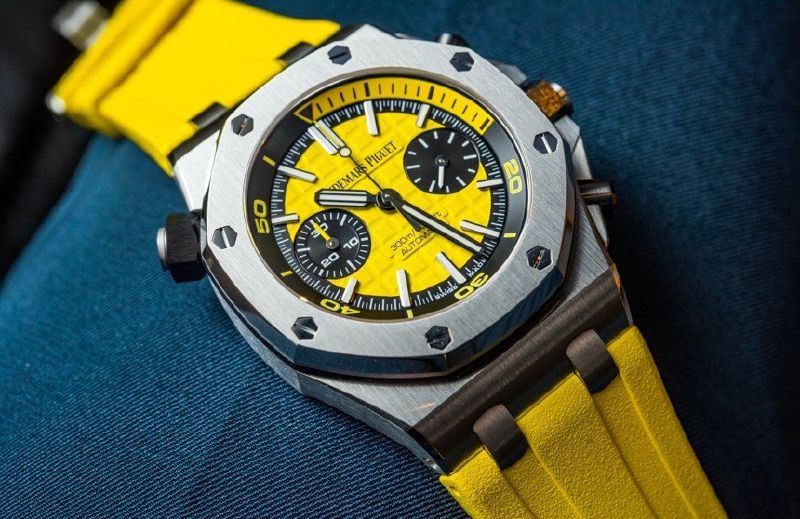 The hands are the signature chunky Royal Oak hands which are huge, baton shaped, and filled with SuperLuminova. The center seconds hand carries a lolipop.

The case exudes a nice luxury feel. As the watch is in stainless steel and quite generously proportioned, there is a substantial heft which can be felt on the wrist, but not one which is altogether unpleasant. Even after a period of acclimatization, one still feels it, is a rather nice and a quite desirable sensation.

The movement is an in-house AP caliber 3124/3841 automatic chronograph movement. As with the double number nomenclature denoting that this is a module movement. The base is derived from the AP C.3120 which is in-house developed and manufactured. The AP C.3841 (which we understand is a derivative of the Dubuis Depraz module) chronograph module is then applied to the dial side. This movement is not new to AP, and we saw this fitted on the Audemars Piguet Jules Audemars Chronograph – a decidedly dressy, and very classy watch. 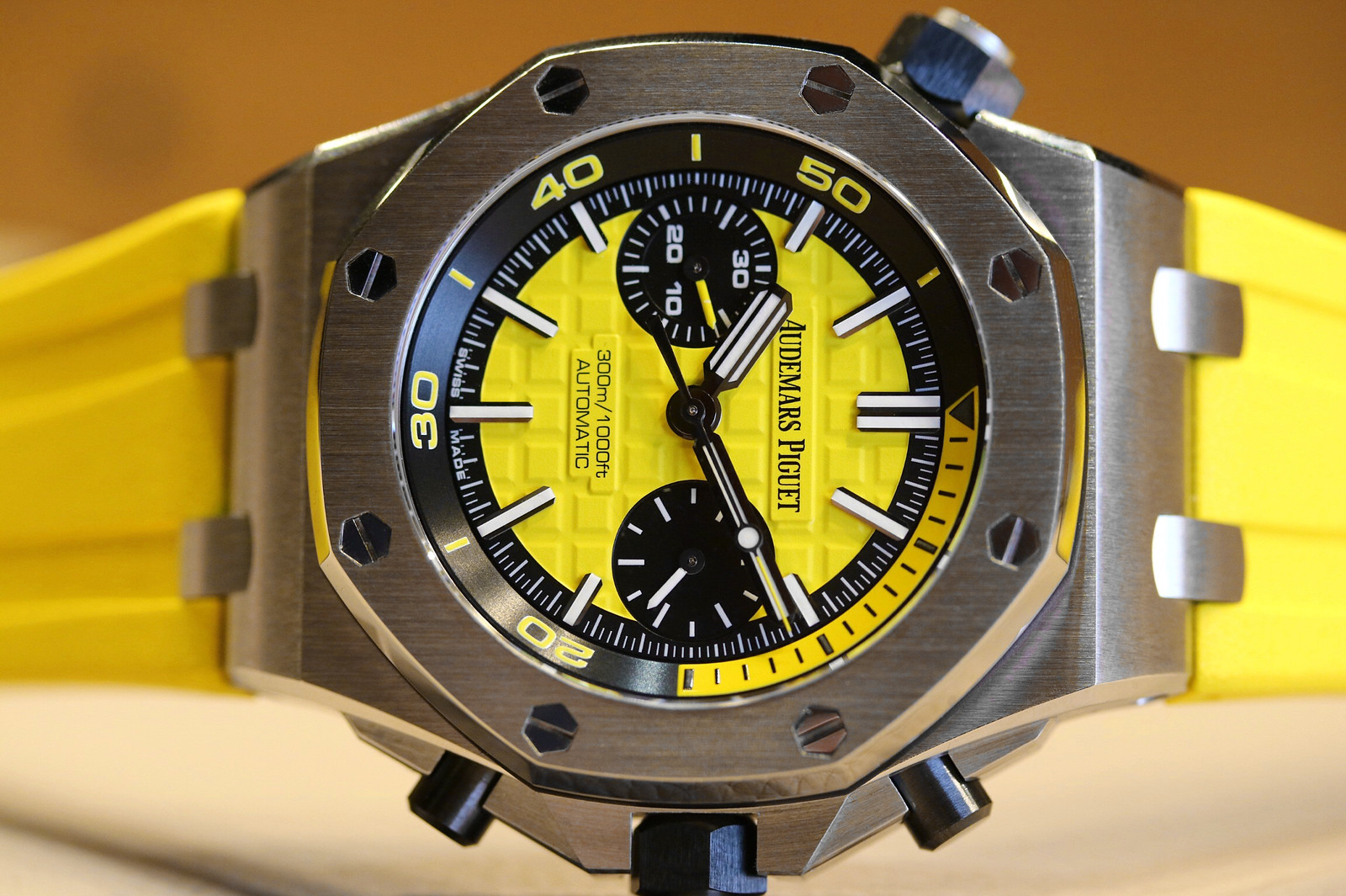 Examining the movement from the back, it is clear that the movement is rather small. It is 29.2mm in diameter and 7.16mm thick. On a case which is 42mm it is and looks small through the sapphire glass back. For some reason, this does not disturb us as much as a small movement in a dress watch, as the massive case surrounding the movement gives the impression of robustness and strength. Qualities treasured in a sports watch. 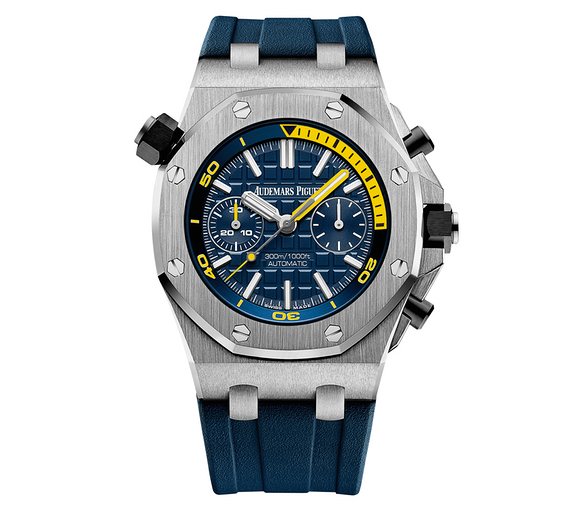 The movement is decorated with Côtes de Genève on all bridges, and anglage is applied. Only the base movement is visible from the case back. The chronograph module is under the dial, and not visible. The small movement is quite robustly constructed. It features a well designed balance bridge. 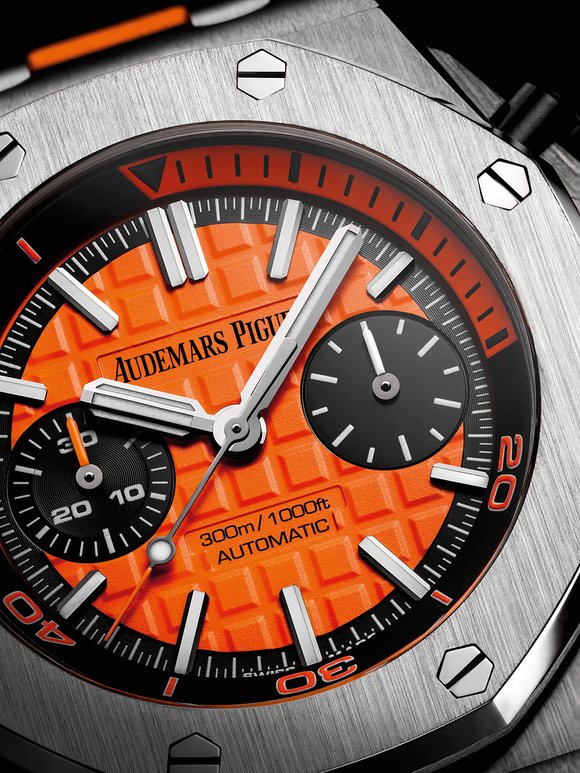 This is a serious dive watch, which at the same time is a luxury item. Over the years, we have come to be a bit bored with the almost unending stream of Royal Oak Offshore limited editions. And frankly, we lost count. Don’t blame us, we think most collectors, except the most devoted Royal Oak specialist collectors would be in a similar position.