How Much Will You Spend On The Watch?

There are two questions that, as a watch critic, I hate being asked. The first comes with alarming frequency, and is this: ‘What’s your favourite watch?’ Often, before my hand can hit my face, it’s caveated by, ‘I’m sure you get that question all the time…’ Or, ‘you probably don’t have one, but…’ And worst of all, ‘perhaps you can’t say…’, as if to suggest I’m somehow beholden to a brand, but bound to a false creed of professional journalistic impartiality, and might – just for them – let my guard down.

The second is almost as irritating: ‘How much do you think I should spend on a watch?’ This is usually motivated by a form of hyper-inverted snobbery, and a trap, albeit not a very good one. It’s posed by someone who has already decided that I would only ever recommend buying a watch from the Argos catalogue if you are eight years old, and that I am one of a breed of pompous, out-of-touch elitists who thinks it could ever be right to spend more than £29.99 on something a smartphone can do much better. For which I am obviously bad.

Other times, the question is genuine, which is just as stupid, but for different reasons. It assumes I know how much money you have, and that I know how much of that money you’d like to spend on a watch. Which patently I don’t. As a member of the middle class, I hope you have less money than me, but fear you will have more.

All the same, you still want it answering. And there are, I suppose, some guidelines I can give you. For example, buy something you like. It sounds obvious, I know, but there’s nothing sadder than hearing some daft lunk lament an impulse buy they later come to regret – a herpes watch. Scrutinise your purchase aesthetically. If you like the case shape, but the date window irks you, don’t buy it.

Secondly, buy something you can afford. I know that makes me sound like a man who irons creases into the front of his trousers, but seriously, don’t get lumbered with a ball-and-chain watch. Remember that most watches are not an investment and are worth considerably less than you paid for them the moment you pay for them, and that you still can buy excellent mechanicals for a few hundred quid.

I’ve lost count of the number of times I’ve told a friend to forget the dream of an IWC for now, and to buy a Hamilton Khaki or an Oris ProPilot instead. To a man, they’ve never regretted taking my advice.

The other thing to remember is – as I said here – that at some point a few years down the line, your mechanical watch (and I assume you’re buying mechanical) is going to need a service that will cost you at least several hundred pounds. Forget to factor that in, and you’ll get a nasty surprise when your watch slows down and a man with colour-coded biros in his top pocket tells you that you have to pay him to make it work properly again.

If you have to have that spendy watch, there is a way to make it affordable. A number of retailers offer interest free credit for up to 60 months. Watches of Switzerland, for example, will ask you for a 10 per cent deposit and then to pay the rest off in monthly instalments. On a £3,000 watch, over a three-year term, that means a £300 deposit and 36 monthly payments of £75. That’s a NOMOS Glashütte Ahoi or a Bell & Ross BR 126 Officer Silver for less than your monthly council tax bill. I’ve not done it myself, but I can see why someone who backs themself to be in a job for the next three years would.

It’s just as possible though, that you already have the money and are aware of the pitfalls, but still want some sound advice on what to buy.

Well, here’s what I’d do. I’d make that money go as far as I could. Let’s say I’ve got £10,000 to spend. I could do a number of things. I could go out and get myself the new steel Vacheron Quai de l’Ile. I’d have to haggle a bit, but at the end of it, I’d have a watch that made me feel like Thomas Crown (yes, yes, I know Steve McQueen and Pierce Brosnan wore Cartier and Jaeger-LeCoultre). That would be a smart thing to do. Or I could sink it into an IWC Portugieser Automatic, with the blue hands and blue Arabic numeral dial, and be happy for the rest of my life. Probably.

But I also know I’d get bored with one watch. So what I’d actually do would be to split the money in half, or even three ways. For that, I could get a Rolex Oyster Perpetual for £3,750, a Tudor Heritage Black Bay Black on a strap for £2,130, and a Zenith Elite 6150 for £5,200. OK, so I’m a grand over, but then I’m buying all three at once and banking on getting along with the sales assistant. 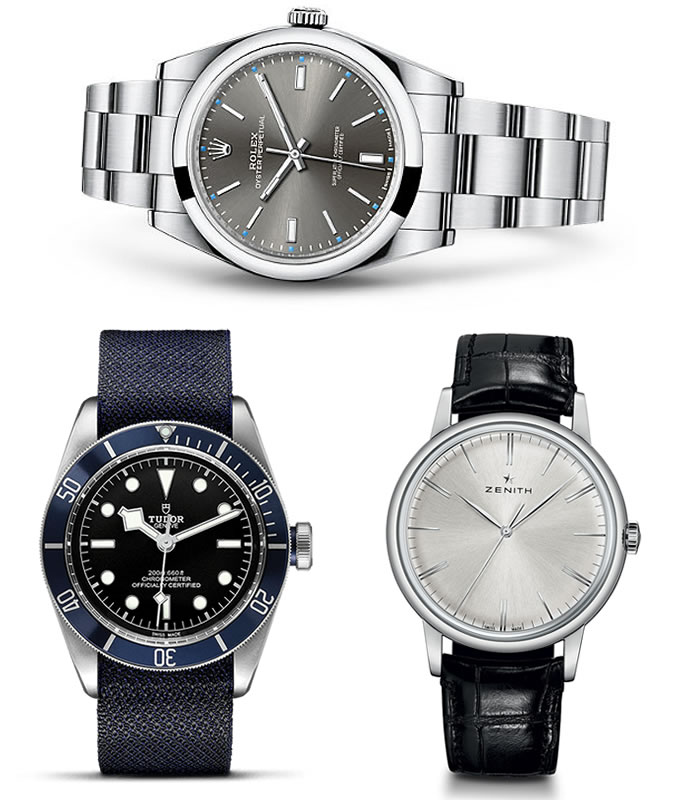 The point is, for the money, I can get a luxury Swiss watch I can wear everyday, another for when I need something sturdier, and something dressy that will impress my father-in-law. And from three brands with unquestionable pedigree. Yes. I think I’d do that.

But who am I trying to kid? It’s your money. Spend it how you will. Just please don’t ever ask me what my favourite watch is.