Jewellery is tough to pull off if you don’t make your money spitting bars. Which is a large part of why we men obsess over watches. Turn up to a business lunch with inch-thick gold draped around your neck and you’re getting seated by the bathrooms. But if it’s around your wrist? Please, sir, do follow me to the chef’s table.

But you can’t rely on one knockout timepiece. As with your wardrobe, a deep wrist rotation allows for better dressing and the chance to switch up your style. Trust us – an alarm clock-faced pilot’s watch glinting on your wrist kills your black tie look as much as a pair of Air Jordans (got that, Ed Sheeran?).

“A sports-led chronograph on a steel bracelet may fit the boardroom, but it’s by no means classic enough for a wedding,” says Muhaddisa Fazal, fine watch buyer at The Watch Gallery. Which means unless you’re fine wearing the same outfit everywhere, you need multiple options.

That’s all well and good, you say, but there’s the small matter of the five-figure price tag on a Jaeger-LeCoultre Master Ultra Thin dress watch. Dropping a house deposit on something designed for red carpets isn’t realistic unless you’re either walking them regularly, or rigging Libor. Thanks be, then, for the subtle – but important – distinction between a watch wardrobe, and a watch collection.

The latter is for men who describe themselves, without a glimmer of irony, as horologists. Those who don’t think: “Does that blue face work with this bomber?”, but “Which of my pinstripe navy suits should I wear with the Patek?” Watch collections tend to appreciate in safes, as multi-thousand pound piles of precious metal. 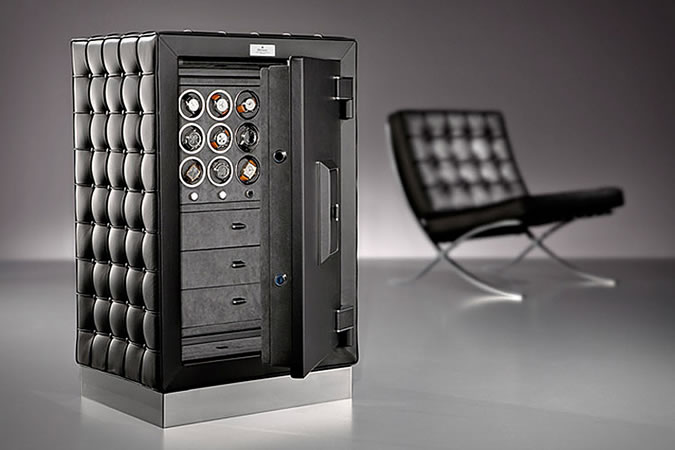 “Connoisseurs can collect timepieces that never see daylight or complement their owner,” says Damian Otwinowski, retail director at Watches of Switzerland’s 155 Regent Street, London store. “That’s an injustice to the craftsmanship.” Or, you know, the equivalent of Smaug the dragon lounging on his pile of treasure.

A watch wardrobe, however, is a group of timepieces that let you set off whatever you’re wearing just so. “We change our skin often,” says Otwinowski. “A watch should be an extension of your attitude, personality and mood.” So these are pieces that actually spend time on your wrist, rather than gathering dust.

A watch wardrobe can be spendy, if you’ve got the means, but needn’t be if you haven’t. The key is that what’s in it gets worn, and that each element is bought with an understanding of how it’ll work with what you wear.

Building a watch wardrobe, then, means covering bases. The old saying goes that every man needs three watches: one for the office, one for the weekend and something plain-faced for formal dinners that tells nothing other than the time and how refined your taste is. Fine if you’re Don Draper. Less so if you’re more often in nightclubs than those reserved for private members.

So, although the trio stands, it needs updating. “It’s beneficial to have a classic watch, a sports watch and a statement choice,” says Fazal. “Most men alternate between a classic and a sports for the daily ensemble, saving that statement piece for an extra special event.”

The classic and sports should ideally have something to do with either your job – if you’re a seaman, then think Rolex Yacht-Master over a pilot’s watch like a Breitling Navitimer – or your hobbies. For keen cooks, a plain-faced chronograph, like the IWC Portugieser, means a better outfit in the office and perfect pasta in the kitchen.

There are some ground rules to watch-clothing styling. First, leathers and metals should match. If you’re wearing brown shoes, or carrying a chocolate folio, you need to switch that black crocodile skin. And if you’re wearing any gold jewellery – probably your wedding ring and cufflinks, unless you’re in the A$AP Mob – don’t wear a silver bracelet. Yes, that includes steel. 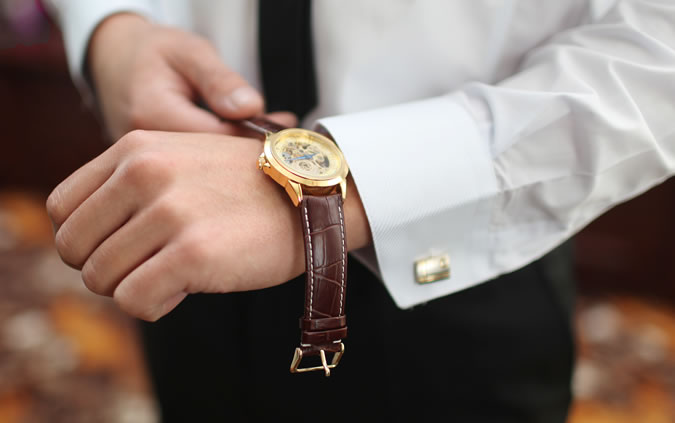 Make sure you match your metals and leathers

Beyond that, it’s about matching aesthetic to environment. As a rule of thumb, the more practical your watch, the less formal the occasion you wear it for.

You shouldn’t need to time anything at a wedding (it won’t make the best man’s speech go faster, although – take our word for it – champagne will) so don’t wear a diving watch. 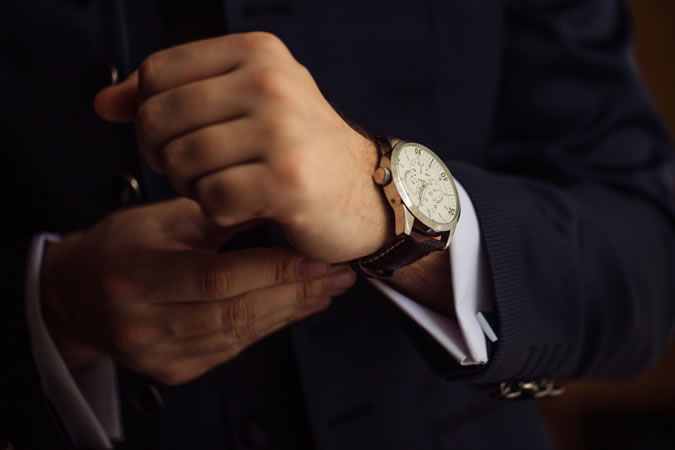 Technically, tradition dictates that if you’re in a dinner jacket, you shouldn’t be wearing a watch at all as you’re having too much fun to worry about the time. But there’s always your phone if you’re not.

Your first watch, then, should be something adaptable. There’s no point dropping your hard-earned on a dress watch if you live in streetwear, or a model with more dials than a call centre when you work in pensions in the city.

You also don’t want to blow the bank. According to Fazal, your first watch sets a benchmark you’re unlikely to dip below, so be sensible and look to upgrade later.

“A first watch should hit between £250-600 with an increase of about £500 every time,” she adds. “Granted, that takes a lot of saving, but most people only purchase a watch once every three to five years.” She also recommends steering subtle, even if it’s been a bumper year on the markets.

“A lot of guys buy a series of big statement pieces whenever the bonus comes in, but in all likelihood, you’ll get minimal wear from a wrist trophy. They’re often too flashy for the office and, realistically, how many weddings and rotary dinners do you go to over a year?” Steer subtle with something like the Mondaine Stop2Go (£450) if your budget’s tight, or the Junghans Meister Classic (£1,250) if there’s a touch more to play with. 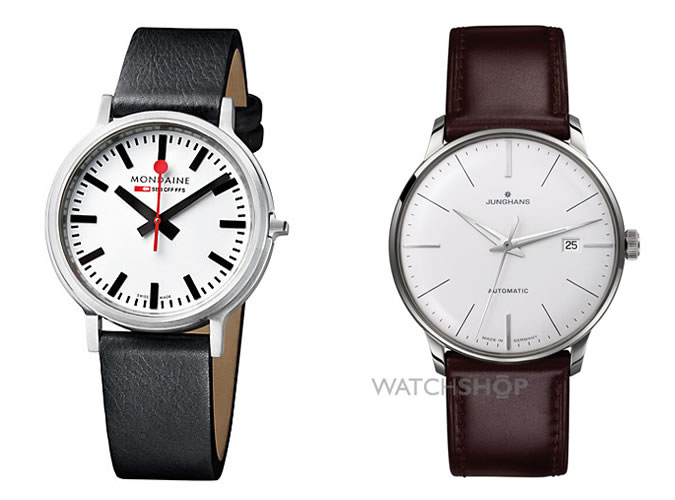 Next comes something with more personality, says Otwinowski. TAG Heuer and Omega’s racing watches are stalwarts of Swiss watchmaking, although expect to see your Carrera or Speedmaster on a fair few wrists.

Less common is something like the Raymond Weil Freelancer Piper (£2,895), an aviation watch produced in collaboration with private airplane manufacturer Piper Aircraft. It’s a timepiece that offers exclusivity, with a less exclusive price tag. 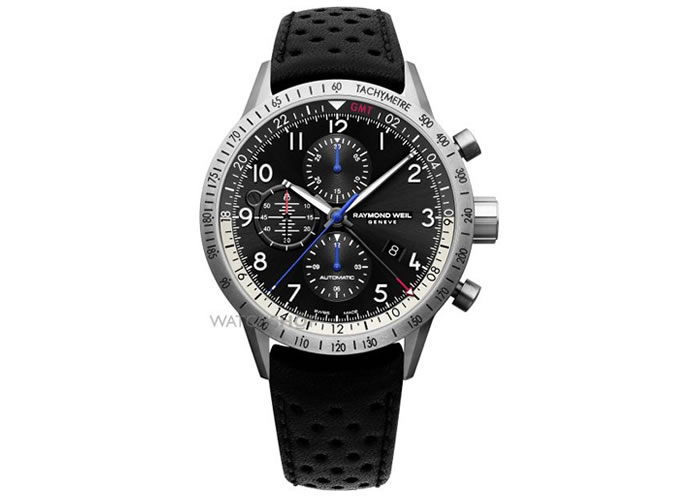 Finally, your formal watch. Perhaps counter-intuitively, there’s an argument to be made that less wear means you should spend more. You get the pleasure of breaking out something special, and run less risk of it getting battered. But formal needn’t mean dull. Baume & Mercier’s Classima range (from £990) is unobtrusive but – with its Roman numerals and gossamer hands – still has personality.

If you’ve saved the pennies, Zenith’s Captain Chronograph (£5,800) dresses up thanks to the gold on the hands and hour markers, but the chronograph adds a ruggedness that means you won’t have to wait for a black tie ball to break it out. 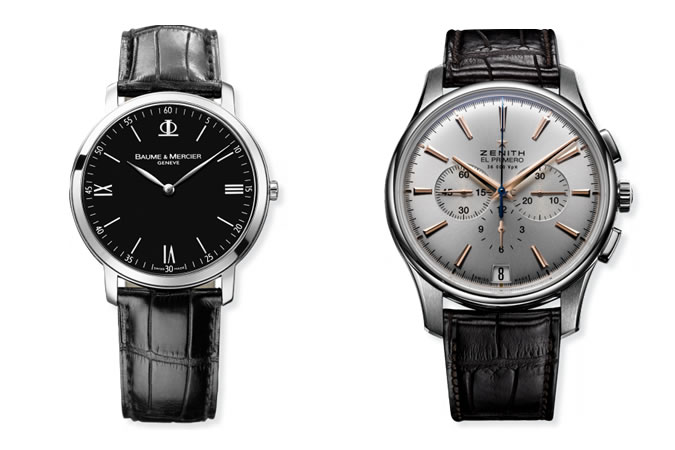 Mechanical watches aren’t like their workhorse quartz cousins. “Good watches are like car engines,” says Fazal. “They need to be maintained every couple of years.”

And just as you wouldn’t take that finely tuned Ferrari to the supermarket, don’t risk damaging your tourbillon on the trolley. That said, remember to – when appropriate – actually wear it. You don’t want your wardrobe to become a security box.

Do you have a wardrobe of watches you move between, or one piece you think works with everything? What occasions have we missed and can your collection ever have too many pieces?

Share your personal recommendations and what’s in your watch wardrobe below.

A Guide To The Pilot’s Watches

Watches Will Only Go Up in Value