From cameras to cars, the West has often looked to the Land of the Rising Sun for technological innovation. And Japan’s mammoth watchmaking industry is no exception.

While Swiss watchmaking has built its name on heritage, skills honed over generations and jaw-dropping aesthetics above all else, Japan’s watch industry focuses on life-enhancing function more than lavish design.

The country has given us the likes of the mighty G-Shock, with its suite of sophisticated features and indestructible case, and more recently Japanese brand Citizen brought satellite technology to the table. No more checking your smartphone when your plane lands and fiddling with your watch to set the time. Just press a button and your watch does it for you.

Since almost going the way of the dinosaurs, the horological old guard has wised-up, recognising their Eastern counterparts’ relentless innovation. Seiko and its Japanese brethren now rub shoulders with top Swiss names each year at Baselworld, and in 2009, the mighty TAG Heuer was even forced to admit it had based one of its movements – the Calibre 1887 – on a Seiko one, albeit in heavily modified form.

The Swiss may lay claim to watchmaking but Japan has long been the industry’s other superpower. Here, we take a look at four key Japanese watch brands, and the timepieces that put them on the map.

The original Japanese watch brand, Seiko started life as a jewellery shop in Tokyo’s Ginza district in 1881. The name Seikosha, though – roughly “house of exquisite workmanship” in Japanese – came 11 years later before eventually being abbreviated to Seiko in 1924.

A national pioneer, Seiko produced Japan’s first ever diver’s watch, the 6217, in 1965, quickly gaining a name for itself in water-ready wristwear. (Roger Moore’s 007 strapped on several Seiko divers for his aquatic missions.) But its most important milestone came in 1969 with the release of the Astron model, the world’s first commercially available quartz watch. Priced the same as a Toyota Corolla, the Astron changed the face of watchmaking with its new battery-driven, super-accurate movement.

Still a major player in the global watch game, Seiko hasn’t rested on its laurels since its early wins. The brand’s new top-of-the-range, ultra-luxurious Grand Seiko models are giving Swiss watchmakers a run for their money.

Equipped with award-winning in-house movements, Grand Seiko watches are amongst the most accurate mechanical timepieces in the world, while their cases come gleaming from Seiko’s time-honoured zaratsu technique – a highly skilled method of polishing which involves applying a rotating tin plate to the case at a very precise angle. Switzerland, watch your back. 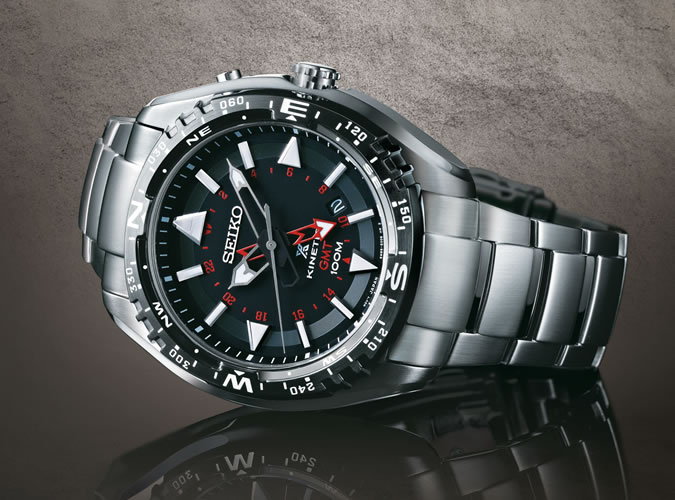 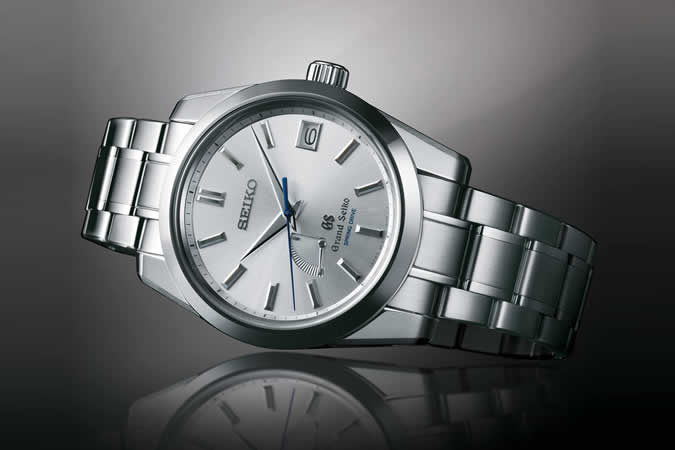 Seiko Diver’s Watch SKX007K
Grand Seiko might be the brand’s apotheosis, but you can’t go wrong with this more affordable stalwart – a robust, no-nonsense automatic diver’s watch. Replace the rubber strap with a NATO version to make it really stand out. 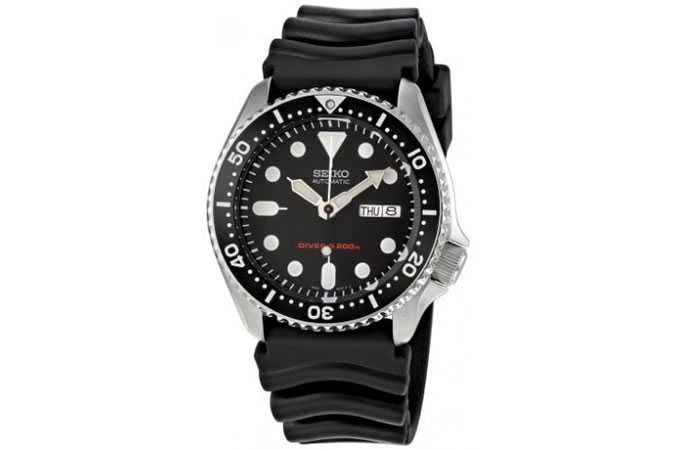 Child of the 1980s? Then you’ll probably know Casio from using its calculator watches to cheat in maths tests. Or perhaps you’re more familiar with the G-Shock, the hulking Godzilla of a watch designed by employee Kikuo Ibe (now a revered company ambassador who tours the world promoting the G-Shock line) to have 10-metre dropping shock resistance, 10-bar water resistance and a 10-year battery life.

G-Shocks, which come in a staggering array of designs from hot pink to camo, can now be found on the wrists of outlandishly dressed Japanese teenagers, special ops soldiers and hip-hop superstars, while Casio’s more conservative Edifice line – which boasts a wealth of tech including Bluetooth sync, smart crown access and world-time adjustment – appeals to the suits.

In 2014, the company introduced the first hybrid time-keeping system, which uses both Global Positioning System (GPS) and Casio’s Multi Band 6 technology to allow a G-Shock to receive radio signals for consistently precise timekeeping.

At Casio’s factories, staff are taught the importance of monozukuri, which translates as craftsmanship and spirit, so – despite the fact that its products are constructed by robots on a conveyor belt, rather than by the steady hand of an artisan watchmaker in a remote Swiss hamlet – Casio’s still serious about the work that it does. 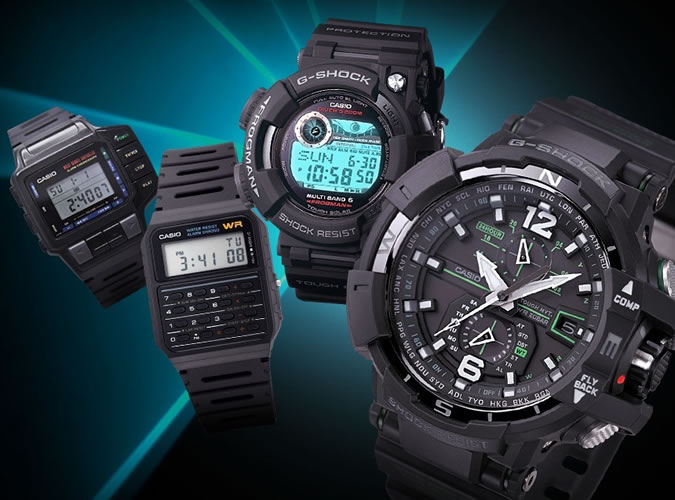 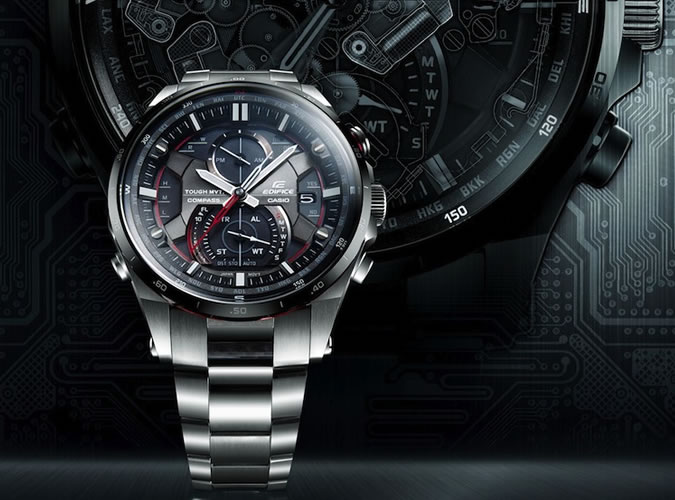 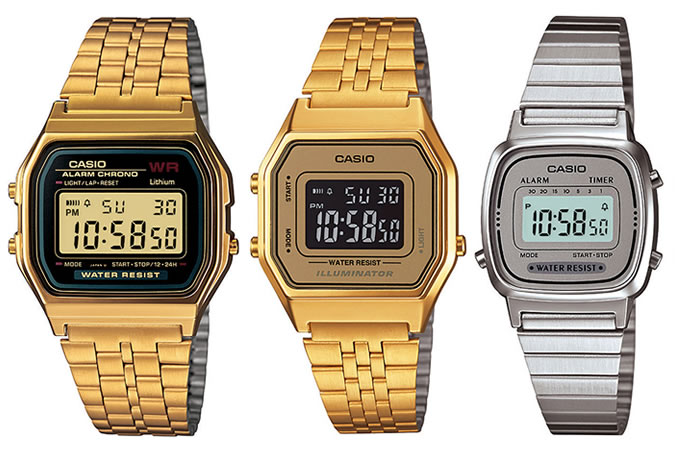 G-Shock GA100C-8A
Understated in dark grey, this analogue-digital hybrid isn’t just for teenagers who play too much Call of Duty. But thanks to its contrast blue neon hands, it still packs the aesthetic punch G-Shock has made its name on.

Shockproof, waterproof to 200 metres and able to cover 29 time zones, this one’s built for almost anything. 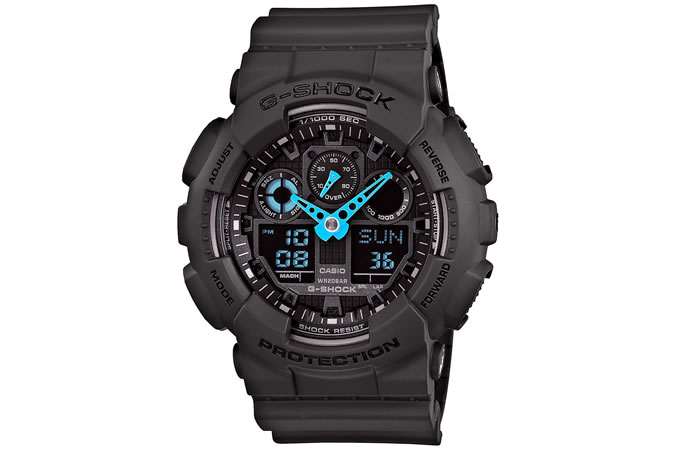 Rolling out affordable watches for almost a century, Citizen has made gigantic strides in quartz technology since its foundation in 1930. The brand’s celebrated Eco-Drive range includes watches that use natural or artificial light (absorbed through the dial) to power a battery that will never need replacing. And like Casio, it’s also released its own satellite-syncing watches (the Satellite Wave collection) – promising accuracy at the touch of a button no matter where you’ve just touched down.

Citizen’s main draw, though, is its broad spectrum of price points. Ranging from around £100 to £2000, the brand offers more models than you can shake a lacquered chopstick at. Whether you want an automatic chronograph, solar-powered military timepiece in khaki tones or a fuss-free dress watch, Citizen has you covered.

In 2012, the company took the industry by surprise when it acquired a respected Swiss movement maker, Manufacture La Joux-Perret, proving it’s got eyes for something other than quartz, and reinforcing its commitment to expanding the mechanical arm of its business. Watch this space. 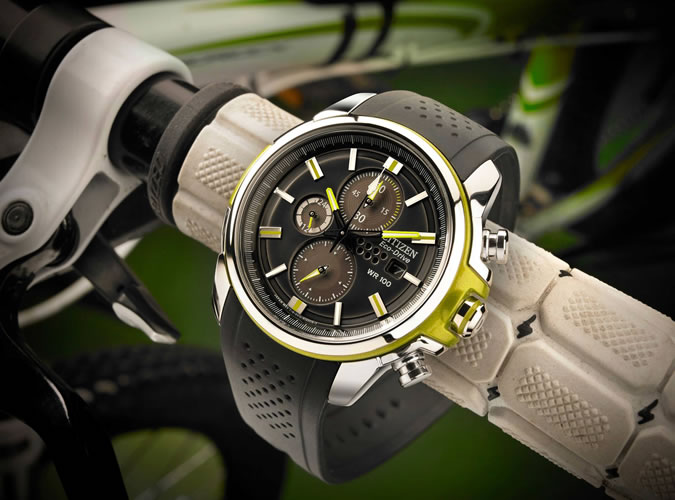 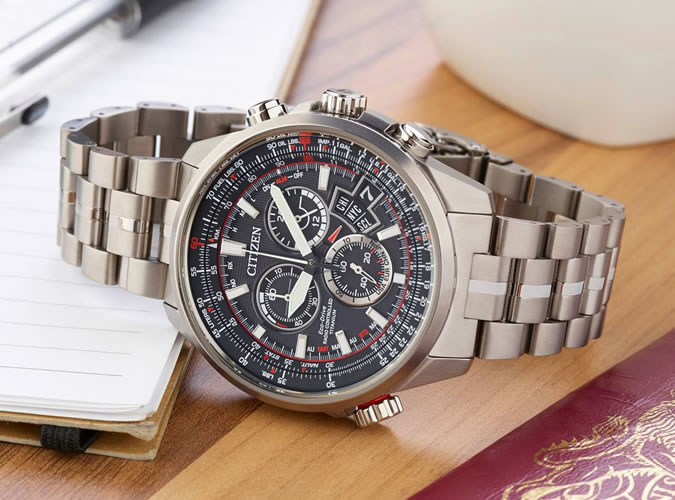 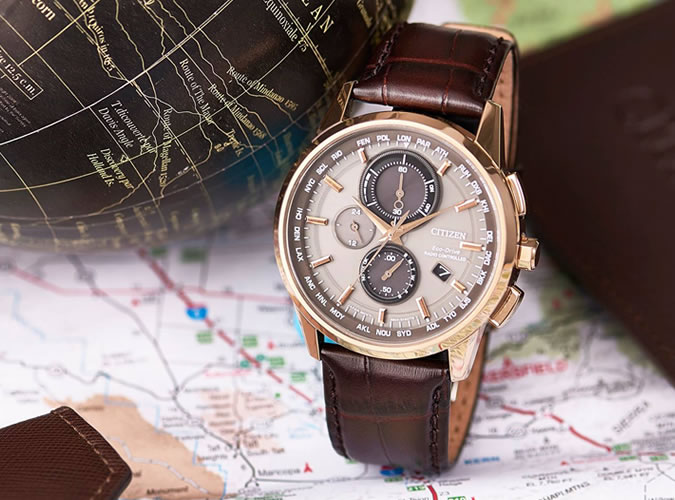 Avion Eco-Drive AW1361-10H
Although it might look like a vintage pilot’s watch, the Avion AW1361-10H is actually anything but.

Along with its tasteful rich brown leather strap and contrast stitching, it comes fitted with Citizen’s Eco-Drive technology – meaning your wrist gets both timeless style and modern tech. 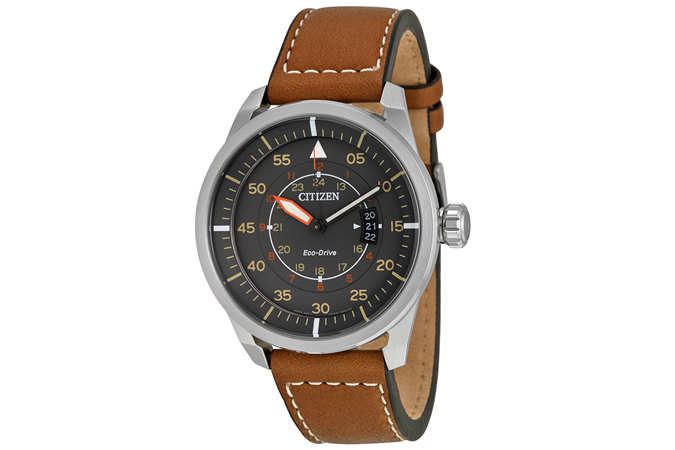 At a mere 66 years old, Seiko Group subsidiary Orient is the baby of the ‘Big Four’ Japanese watch companies. Which is somewhat surprising since – seemingly reluctant to compete with Casio and Citizen for high-tech bragging rights – its focus is mechanical watches instead of quartz ones, while its output consists mostly of timepieces that are variations on its classic styles, rather than an army’s worth of kitted-out options.

The brand’s elegantly unfussy dress watches have a fifties feel, while its diving models – fit with brightly coloured dials and steel bracelets – offer a more statement-making take on timeless style. 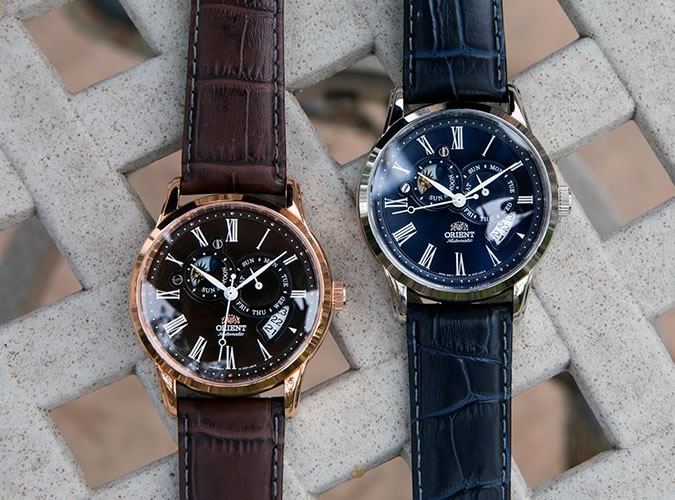 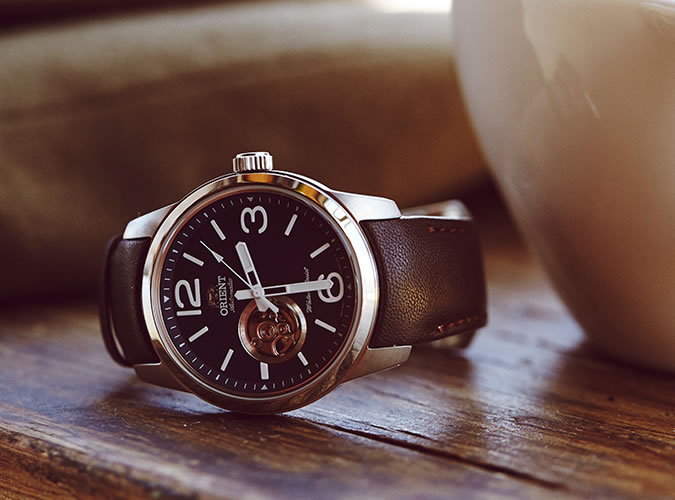 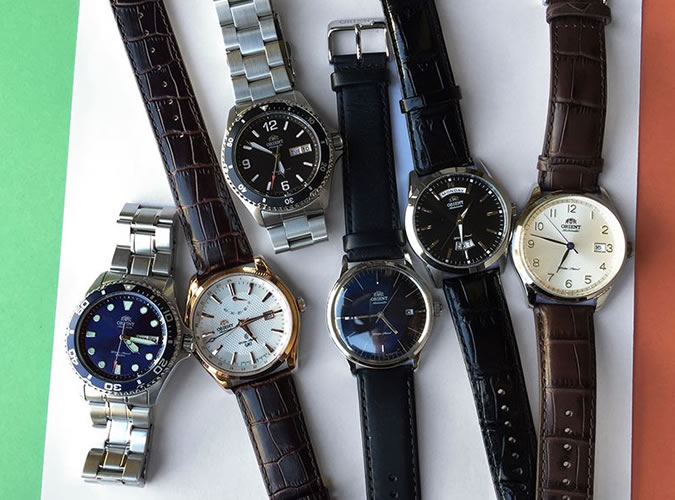 Orient Classic Automatic ES00005B
A gem from Orient’s Classic Automatic range, this dress watch boasts elegant dauphine hands and a single Roman numeral at 12 o’clock, and also tells the day and the date without cluttering up the dial.

Its winding crown, unusually positioned between 3 o’clock and 4 o’clock, makes this one for men who like their wristwear elegant, yet unexpected. 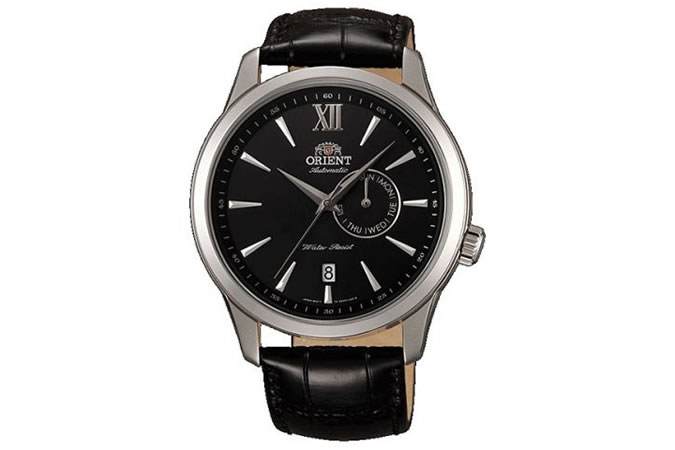 Are there any other Japanese watchmakers we should get to know? And do you think Japan or Switzerland holds the title as the top destination for quality timepieces?