On Saturday, November 11, Phillips held the Heuer Parade auction in Geneva. It was a sale of 41 vintage Heuer chronographs from the Crosthwaite & Gavin Collection. In an article published a day before the auction, we offered a comprehensive guide to the watches and a bit of context for the auction overall. Today, we consider the results of the sale and how they may impact the market for vintage Heuers going forward.

Setting the Stage: The Background And Some Recent Sales 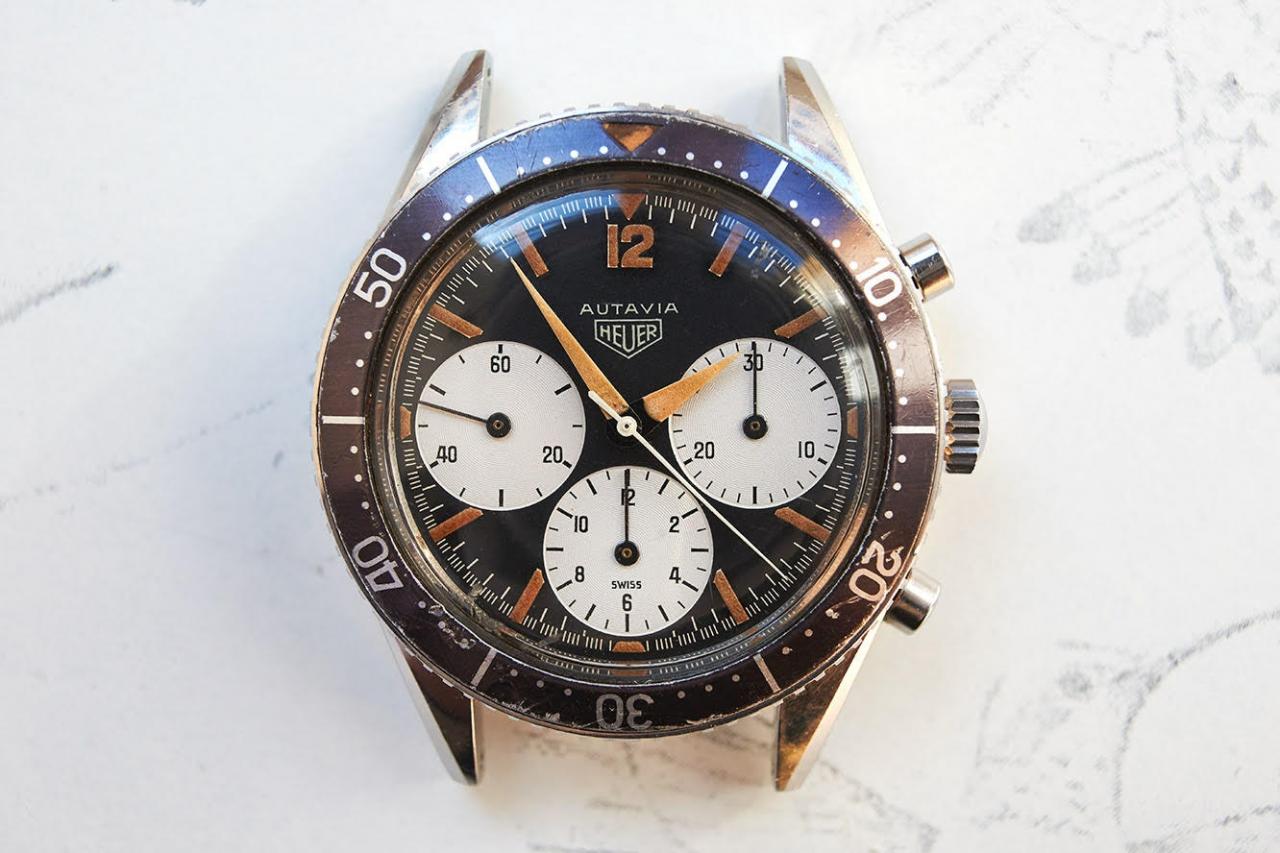 The results of 2016 and 2017 have shown considerable variability, however, with several results defying logic. We saw a notorious “Franken” Autavia sell for $70,000 in an Auctionata sale (June, 2016) and several relatively common Heuers sell at two to three times prevailing market prices. These types of sales often upset the market, with subsequent sellers having unrealistic expectations, and buyers left to explain that the precedent was an outlier. One seller carries the loot to the bank; the market may be left in turmoil, with wide gaps between the bids and the asks.

Sorry Folks, No Fireworks At The Parade 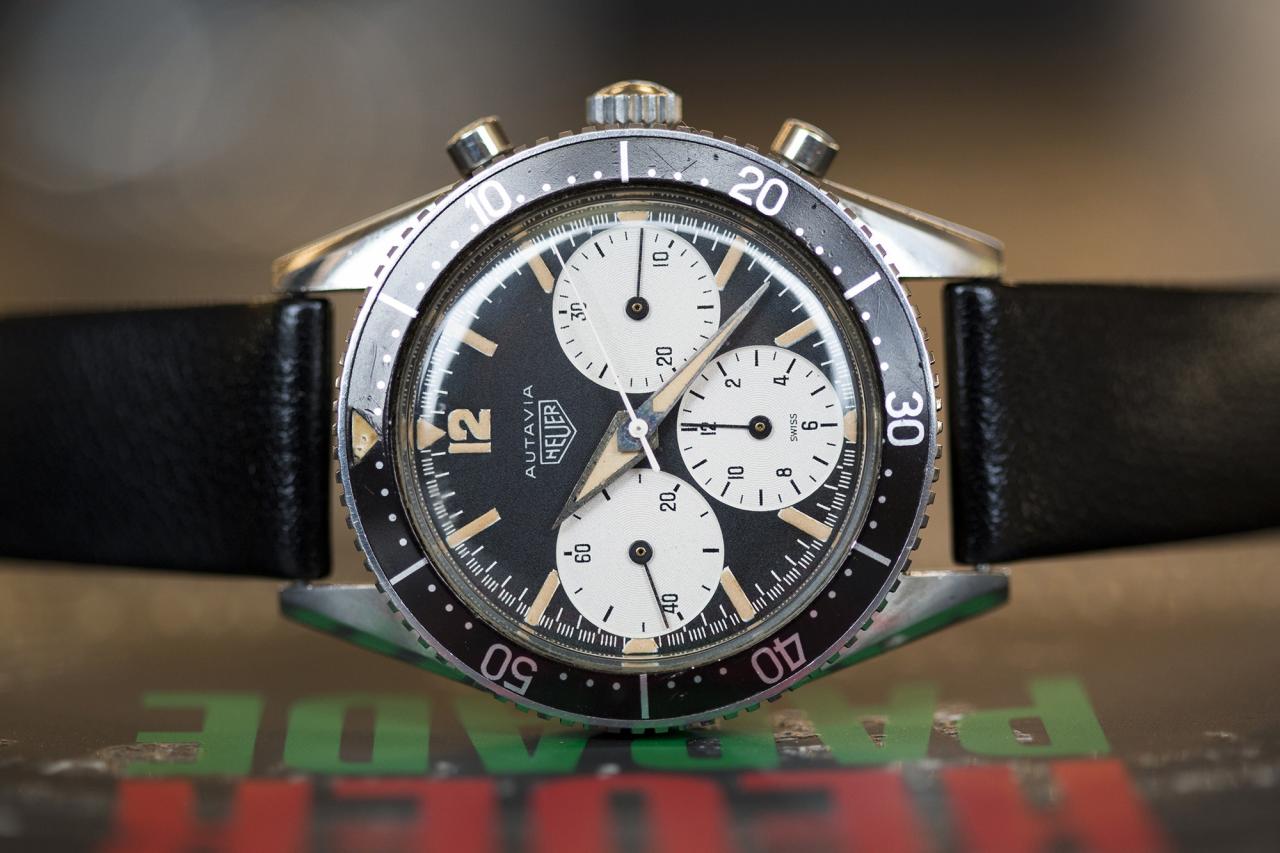 If $200,000 represents the right-hand peg on the gauge of excitement for vintage Heuer chronographs, the Heuer Parade fell short of the mark, with the top lot, a “Big Subs” Autavia Ref 2446 with steel edged hands (Lot 3), reaching “only” CHF 137,500.  Still, this was $12,000 above the previous best for this execution, pointing more to the value of the earlier execution (with the all lume hands) than to any weakness in the “Big Subs” Autavia category.  The sale of a two-register “Big Subs” Autavia at $87,500 (Lot 5) likely represented a record for this model, but the price drew no applause, as the crowd wanted to see a six-digit number. 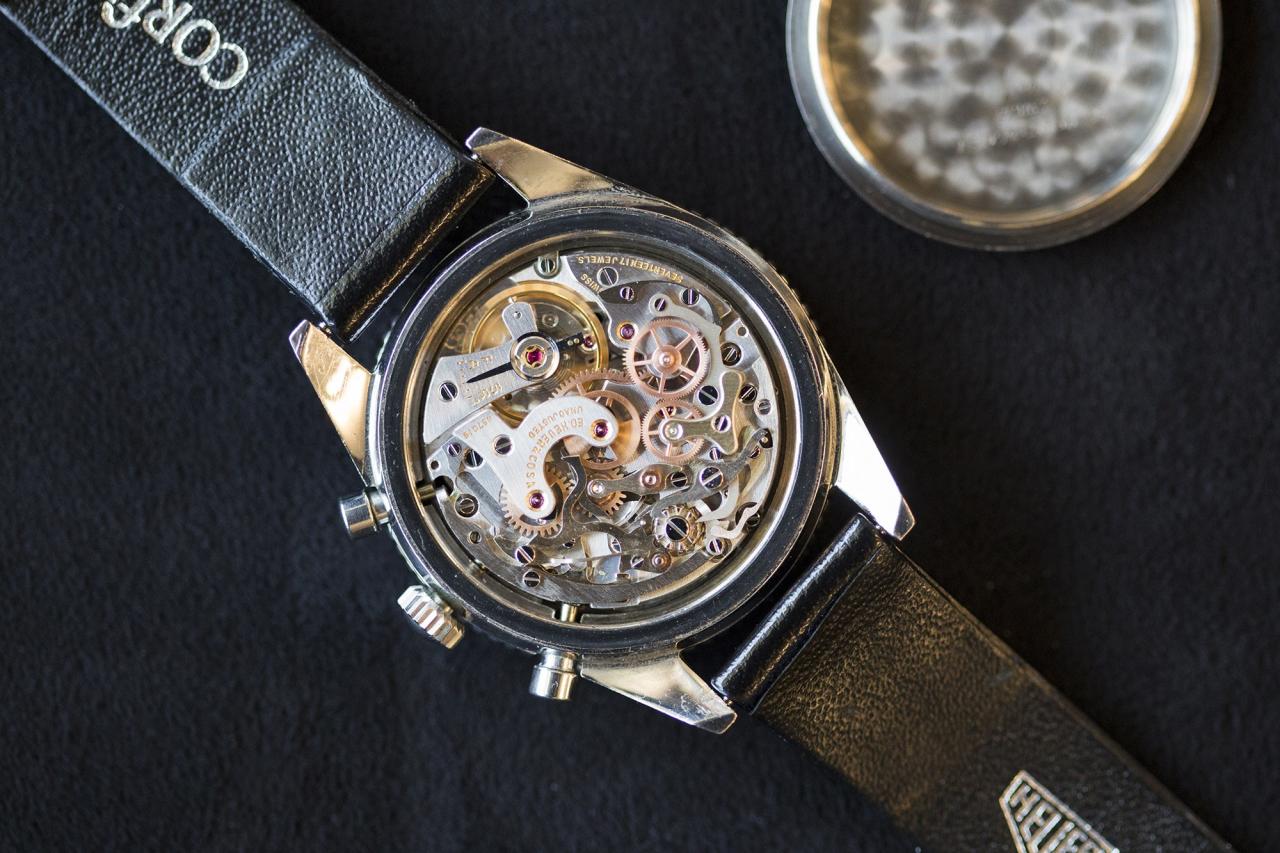 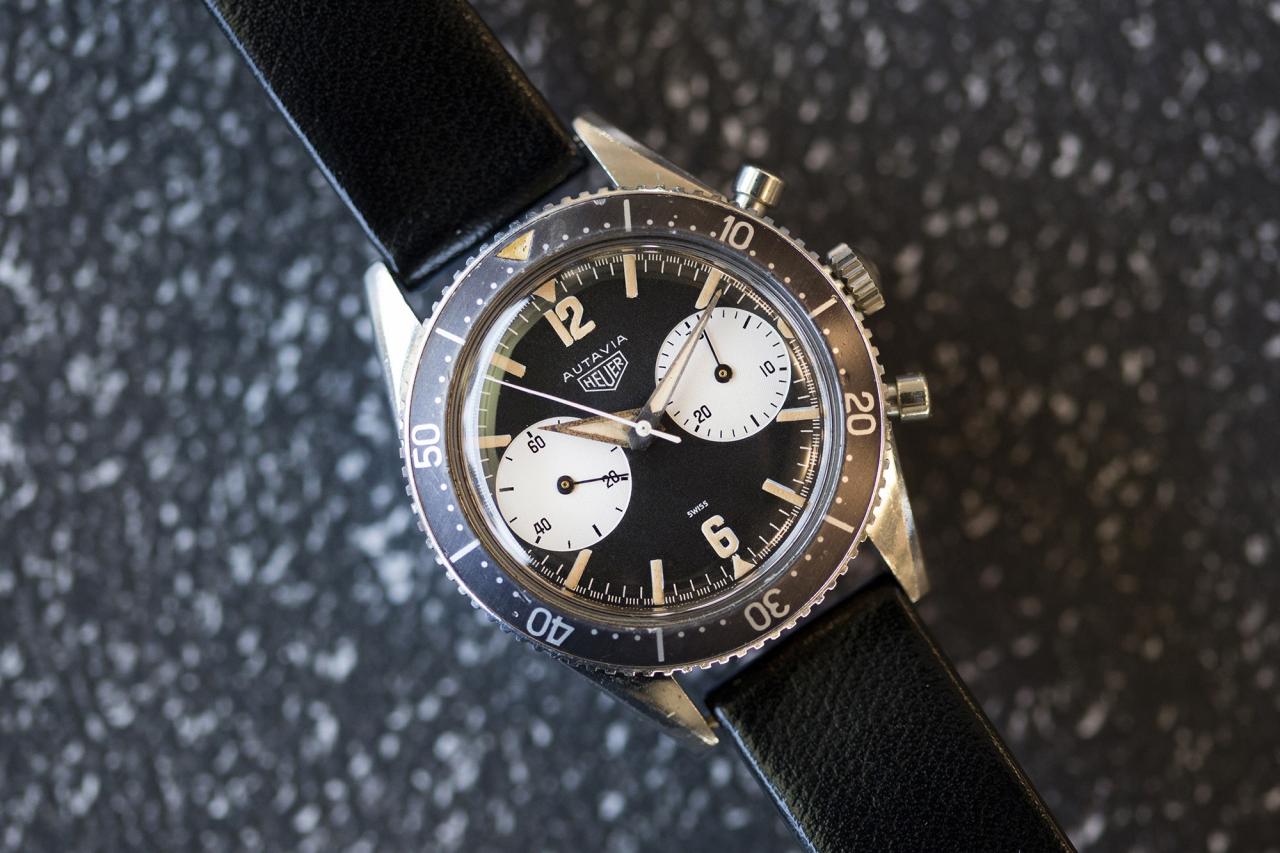 Not Much In The Bargain Basement

While auction magician Aurel Bacs could not rally the Heuer enthusiasts to hit the right hand peg of the Heuer excitement gauge, he did ensure that the needle stayed well above the left peg throughout the sale. Only two watches sold for under $12,000, while the Haslinger sale in 2010 had 76 of 80 watches below this mark. Yes, it’s been a strong seven years for the vintage Heuers. Taking away the four lowest lots and the four highest lots in the Heuer Parade, we saw 33 lots sell in the range between CHF 16,250 and CHF 58,750.

Perhaps most importantly for the health of the vintage Heuer market, the Heuer Parade produced few “outliers,” far above or far below expected ranges. In many instances, recent strong prices of the 1960s Autavias were validated, and the 1960s Carreras made a notable advance, perhaps moving into the vacuum left by the recent rapid ascent of these Autavias.

A defining characteristic of the Crosthwaite & Gavin Collection is the superb condition of the watches. With few exceptions, each of the watches in the Heuer Parade represented the very best samples that the collectors’ market has seen. Going into the auction, there were questions about how well the more common watches, which happened to be “100 point” samples, would fare, especially with the sale seeking to draw in collectors new to the Heuer brand, who might not fully appreciate the difficulty of finding vintage Heuers in true mint condition.

Any concern that the superb condition of these watches might not be fully appreciated was addressed early, with Lot 7 – the often-underappreciated manual wind Autavia in Siffert colors – going for $16,250 (twice the prevailing market price for good samples). Condition was also rewarded with the Autavia Reference 2446C GMT (Lot 25) selling for CHF 27,500. Yes, we see these GMTs on the market regularly, in the $8,000 to $15,000 range, and it was reasonable to see the very best sample double that price.

Color Matters
The brand new model is usually a definite nod on the modern-day man that has a sportier edge heralded in with its striking selection of elements – a 43mm Grade 2 micro-blasted black PVD titanium case framed having a black ceramic bezel and beige tachymeter scale. 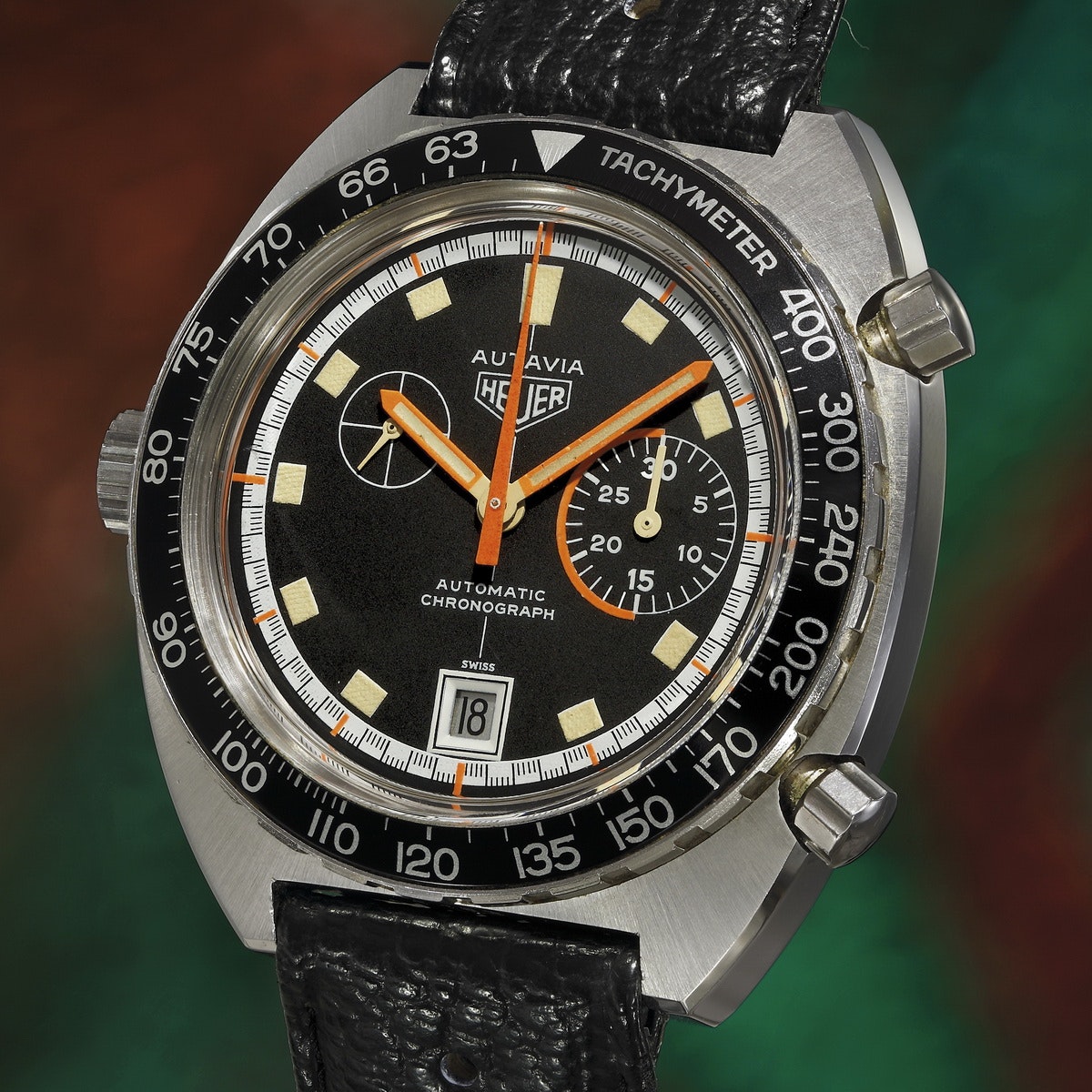 Over the last 18 months, the vintage Heuer market has been dominated by two colors – the black and white of the 1960s Autavias. The Heuer Parade showed, however, that today’s buyers are willing to pay up for strong, vibrant colors. We saw the brightest of all the Heuers, the “Exotic” Autavia, Reference 1563 (Lot 14) sell at CHF 31,250, while a particularly vibrant “Orange Boy” Autavia (Lot 37) sold for CHF 25,000. And these two lots evidence another new reality of the Heuer world – C-shaped cases from the 1970s are A-OK, especially when they house colorful dials. In terms of the vintage Heuers, this is the reality of the 1960s versus the 1970s – yes, the purists can demand round cases and classic column wheel movements, so long as they are willing to have only black and white on the palette. Collectors who can see past the C-shaped cases and cam-powered movements, will find that Heuer did some great things with red, blue, and grey in the 1970s.

Vintage watch collectors can have the debate – is tropical a color or a condition? Is it merely fading or something fabulous? For those bidding in the Heuer Parade, there was no doubt that tropical dials demanded a premium. A Yachting Carrera, Reference 2447 (Lot 16) combined a tropical dial with a scarce execution, to yield a final price of CHF 58,750. The second priciest Carrera was the Reference 2447 SNT (Lot 8), going for CHF 35,000, a notch above the Carreras on which the black remained black. The second execution Autavia Reference 1163 GMT had both a bright “Pepsi” bezel and a tropical dial, to reach CHF 30,000, twice the price of the rarer first execution of the model, with its quieter colors (Lot 31). 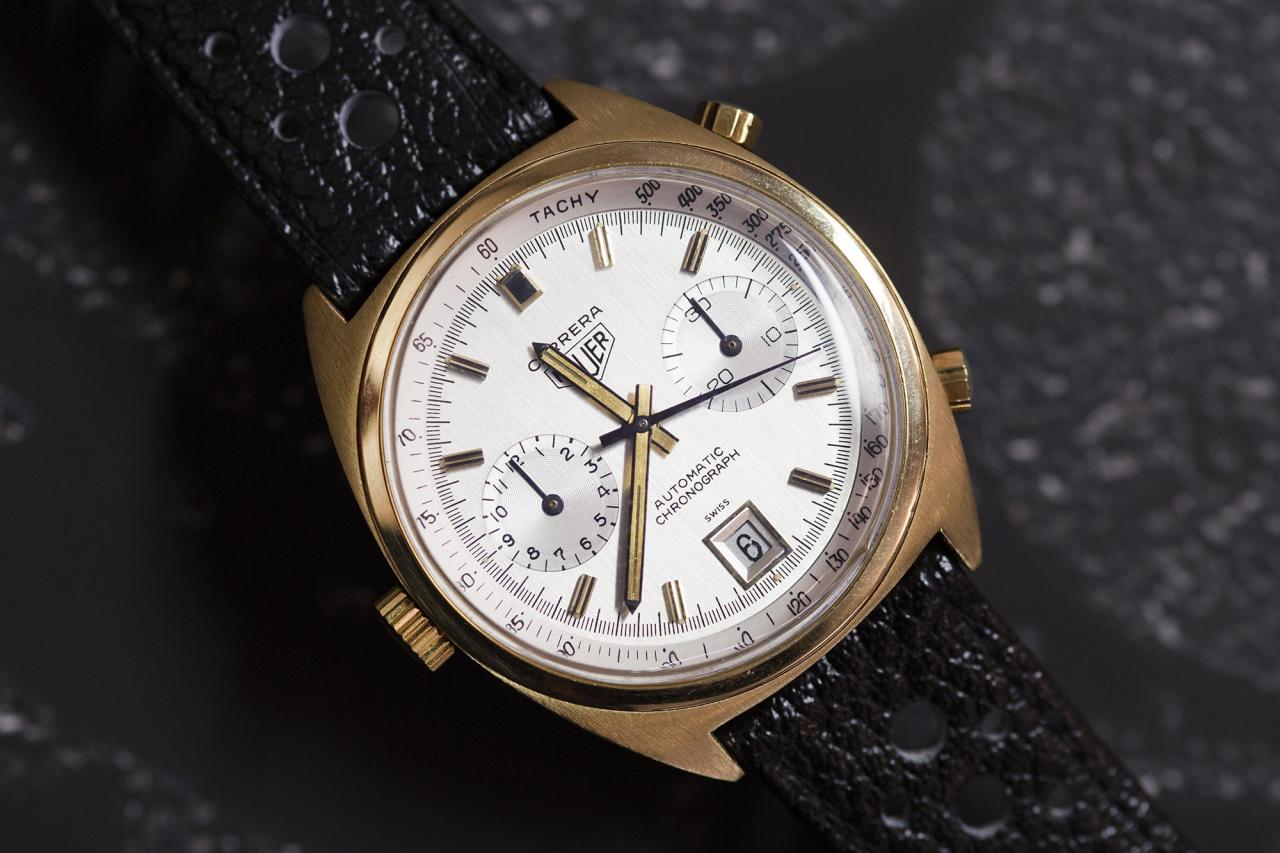 It’s a metal as well as a color, and the watch world is split between those who will wear gold and those who won’t. But in the mid-1970s, Jack Heuer gifted 18-karat gold automatic Carreras (Reference 1158) to the Ferrari Formula One drivers, so in the vintage Heuer world, gold is tolerated, or even admired. There’s a bit of a club-like mood among collectors who own these Carreras, and these watches rarely leave the club. The two gold Carreras in the Heuer Parade achieved prices consistent with prevailing “street” prices, with the champagne / black model (Lot 39) going for CHF 35,000 and the silver version (Lot 15) at CHF 22,500. 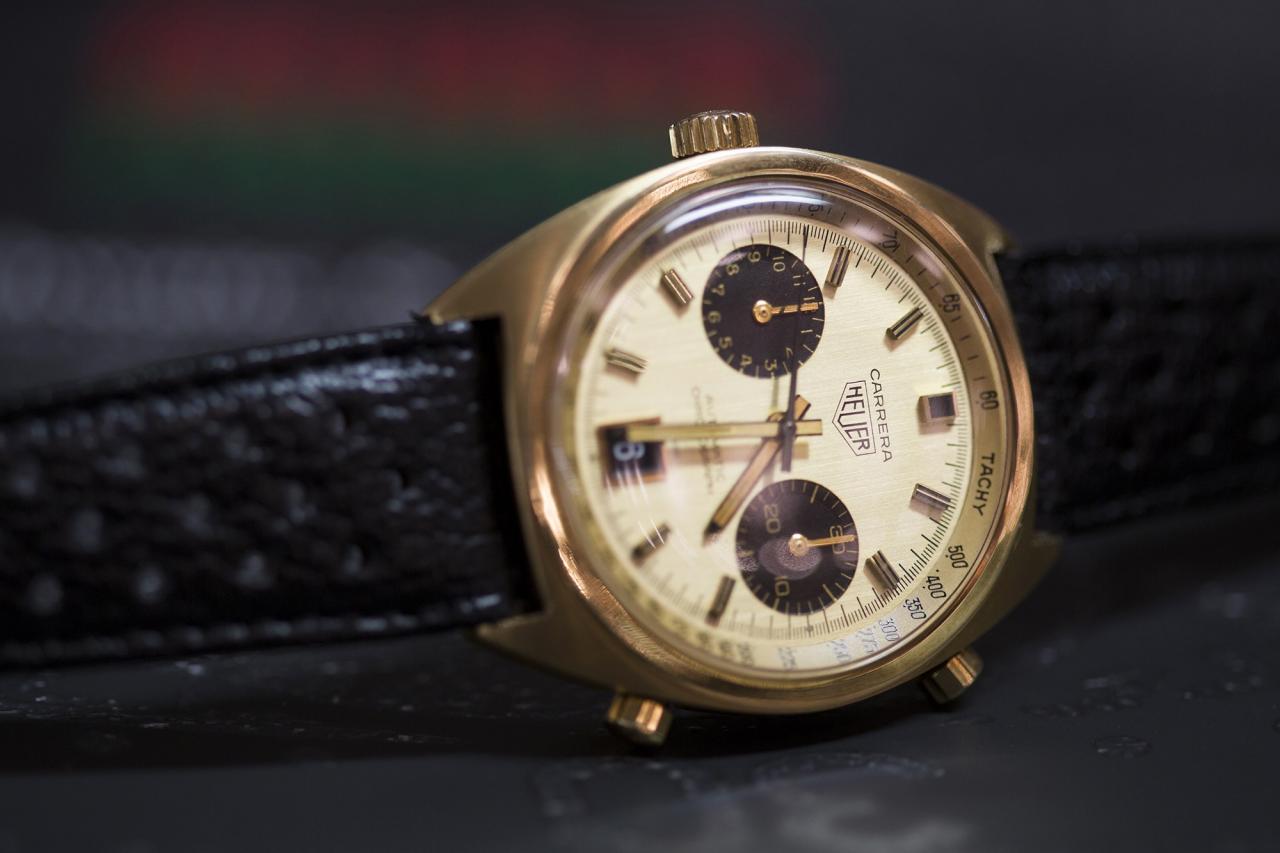 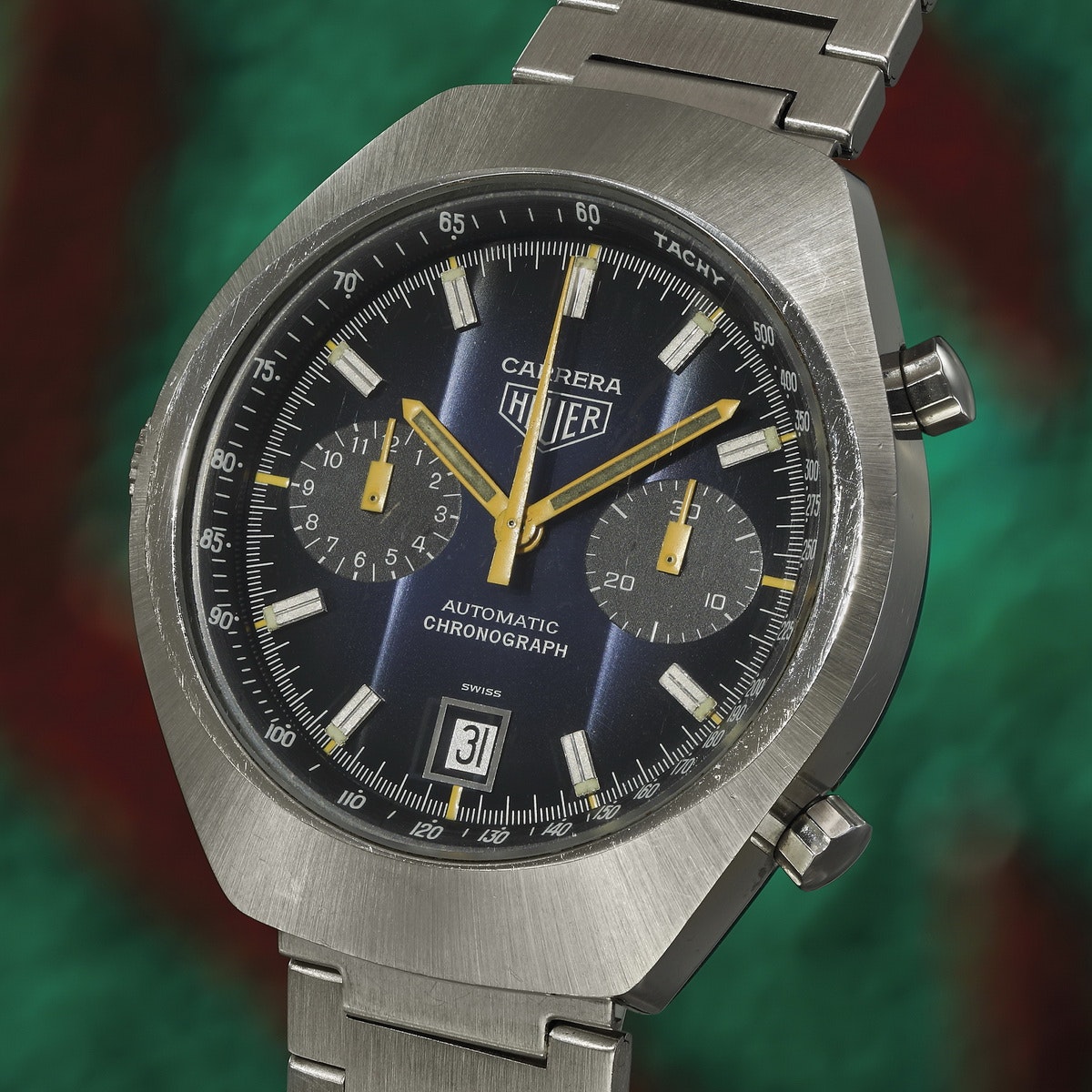 Any good parade will have a military band, and the Heuer Parade didn’t disappoint. The band was small, and missing most of the military instruments we are accustomed to hearing, but it made some loud music for those gathered at La Reserve. When we think of military Heuer chronographs, we would think first of Germany (the Bund), Italy (the A.M.I.), and Israel and Argentina (with Autavias). So what were we to think when players from Belgium, Jordan, and Angola arrived for the Heuer Parade? But these unexpected Heuers added some power to the Heuer Parade, with a barrel-shaped Carrera issued to Angolan rebels (Lot 22) sold to the TAG Heuer Museum for CHF 31,250. Carreras worn by troops of Belgium and Jordan, both exceptionally rare, sold for CHF 30,000 and CHF 22,500, respectively.

There were a couple of watches considered “grails” by the Heuer community that may have underperformed expectations. The Carrera 45 Dato with the “Wings and Wheel” logo of the Indianapolis Motor Speedway (Lot 11) sold for CHF 32,500, while the black-coated Monaco known to collectors as the “Dark Lord” (Lot 6) sold for CHF 52,500. Both these watches may have suffered from the overhang of other samples recently in the market. A “Chronomatic” Autavia in Siffert colors (Lot 42) achieved CHF 68,750, well below the $87,500 achieved in a June 2017 auction.

So What Does The Heuer Parade Ultimately Mean? 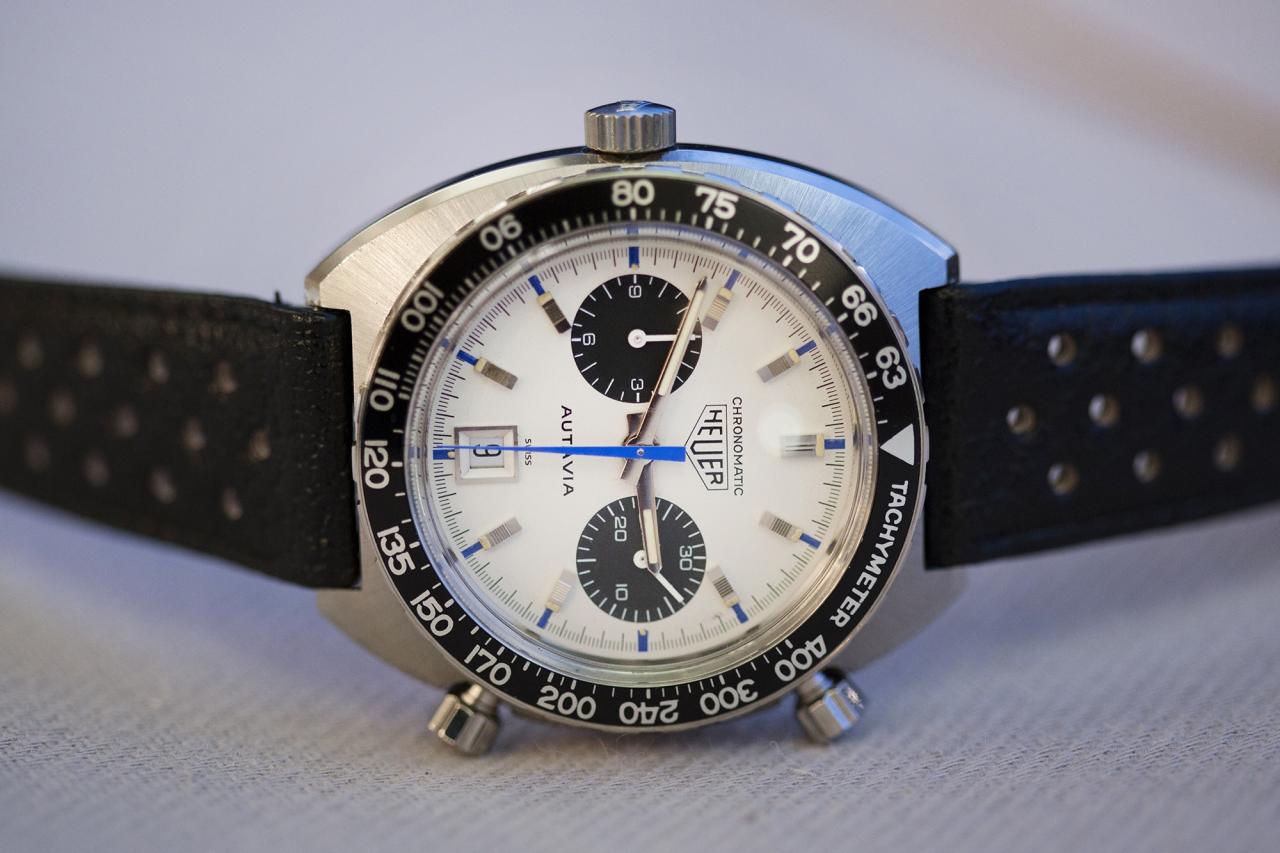 The Jo Siffert Chronomatic Autavia achieved a result well below one seen earlier this year.

In the world of vintage watches, there are markets within markets. Breadcrumbs leading to the Heuer Parade might show “Watches  > Vintage > Sport > Chronographs > Heuer.” But within the “Vintage Heuer” category, there are the extremely rare models, as well as the watches in extraordinarily good condition. Many of the watches in the Heuer Parade were the “best of the best,” being either exceptionally rare, or in exceptionally good condition, with some watches checking both these boxes.

We can look at the results and see some broad trends – for example, models or styles attracting or losing appeal – but it is hazardous to extrapolate from the results of the Heuer Parade to prices that we will see “on the street,” for more ordinary watches.

Indeed, It Was A Parade

July Fourth can be a busy day. In the span of a few hours, we run a road race, have a cook-out, cruise the malls, head to the town square for a parade, and then go to the overlook for the fireworks show. Watching the steady flow of watches and bids in the Phillips sale of the Crosthwaite & Gavin Collection, it did seem like a parade – orderly; properly spaced; everyone in tight formation, without any outliers.

If you came to the Phillips tent at La Reserve, hoping to see fireworks, you would have been disappointed. But if you wanted to see the bright colors and strong rhythm of the very best Heuer chronographs marching ahead, you saw an amazing spectacle.