Blame the Olympics, but bronze tends to be considered an also-ran. It’s third place on the podium, it’s prehistoric technology. It’s not, for most men, the first choice when picking a watch. But then, most men are magpies, attracted to anything that glitters. And though bronze may lack shine, it’s horology’s most singular metal.

Watchmakers like gold and stainless steel because they’re unreactive. They’re lustrous, but sterile. Copper lives. It reacts with your skin to develop a patina that’s distinct to its wearer, a record of its relationship with his wrist. It’s also strong, antimagnetic, and won’t corrode in seawater. Hence its popularity with millenia-old boatbuilders and decade-old naval watch brands.

But perhaps most importantly, when everyone else is wearing gold, silver and steel, repping bronze on your wrist shows that you don’t follow the crowd. So embrace your inner Captain Nemo and enter the bronze age.

Carl Brashear was the US Navy’s first amputee diver and the first African-American to qualify as a Master Diver, in 1970. Based on Ori’s fantastic Sixty-Five, this tribute is fittingly nautical, from the dark blue dial – it’s the last colour you can see underwater – to the engraving of Brashear’s diving helmet on the steel caseback.

And at a subtle 40mm, it’s the play between navy and bronze that stands out. Not the size. 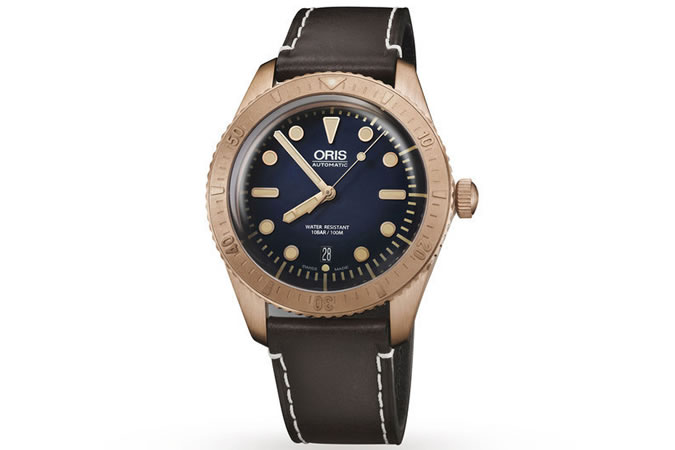 Every version of Tudor’s much-praised Black Bay model elicits the “oohs” and “aahs” of a royal birth. But this beauty, announced at BaselWorld back in March, is particularly deserving of hyperventilation, for its marriage of classic dive watch design and rustic colours.

It features Tudor’s new in-house movement, encased in a bronze alloy that patinas evenly, rather than in blotches. It even comes on a version of the parachute elastic French sailors wrapped around their wrists, since their watches weren’t issued with straps. This is updated heritage done perfectly. 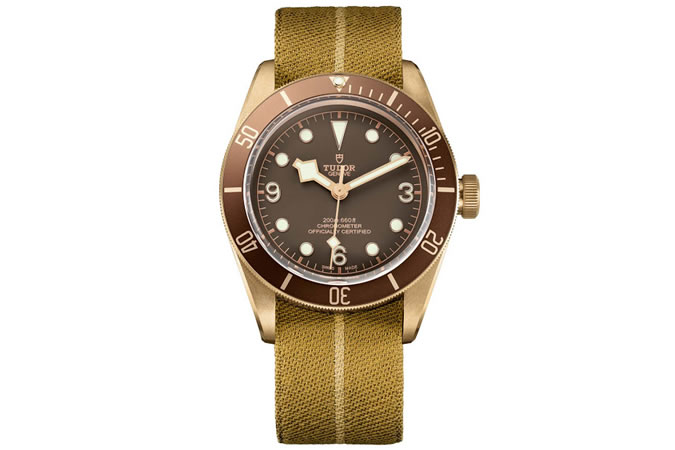 Panerai is best known for supplying timepieces to Italian frogmen in World War II, a heritage that’s schooled it in the ways of bronze timepieces.

The Submersible Bronzo edition’s dial is a pool of green, in a beefy port-hole of a case that will look better with every passing year. It’s that bronze watch all others aspire to.

Available at Panerai, priced on request. 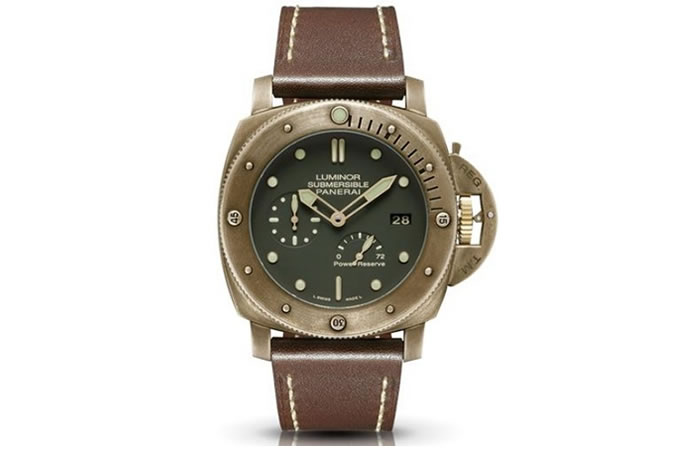 A little known company with a diving history dating back to 1950, Squale make some of the coolest watches to have plumbed the ocean depths. The brand is developing a cult following in the watch world, thanks to bakelite bezels and Spartan designs that would pass muster with Jacques Cousteau himself.

Oh, and FYI: don’t embarrass yourself by saying it wrong amongst the cognoscenti – it’s pronounced ‘Skwah-lee’. 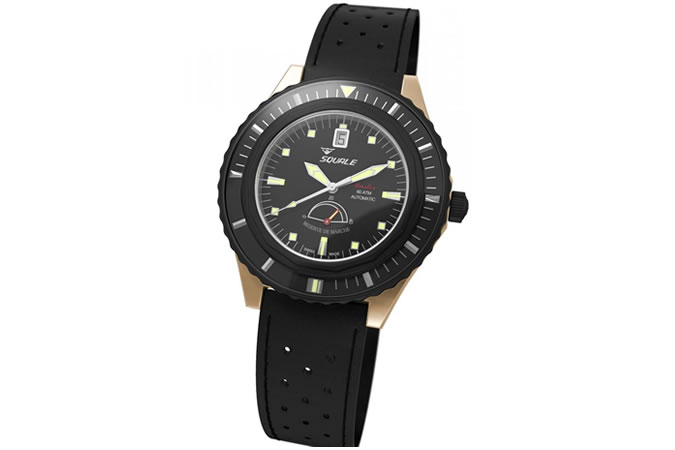 Founded by a bunch of like-minded dive enthusiasts, Helson hasn’t been around long but is already carving out a niche in the dive watch sector. Its more affordable models use Miyota movements to keep the cost down, but at the higher end of the price scale you’ll find the trusty Swiss ETA 2824-2, which is favoured by a multitude of high-end brands for its reliability.

The Stingray Bronze comes in a 43mm or 47mm case and an array of dial options, from muted plain colours to a blue or green rippled-water effect. 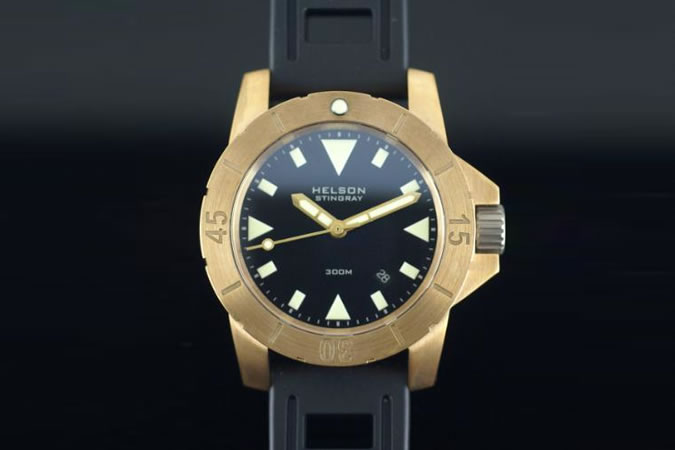 There’s more bronze on this 46mm horological hunk than around the necks of the British Olympic squad. Unfairly deemed a poor man’s Panerai by some, U-Boat is for the man who likes chunky, attention-grabbing watches, and thinks the cast of The Expendables lead the way in the style stakes.

Also, unless you’ve asked your tailor to add an extra three-inches to your shirt cuff, the only suit you should wear this with is a wet-suit. 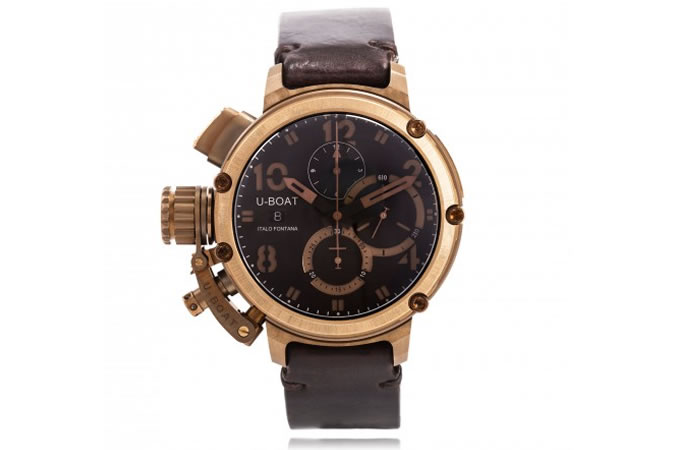 This no-nonsense, manual-wind Fleiger is Teutonic watch design at its best, boasting a 44mm, solid bronze satined case and crisp markings on a metallic grey dial. It’s also got an exhibition caseback, for nerds who like to see what’s going on in the engine room.

Wear in the boardroom or the bar. 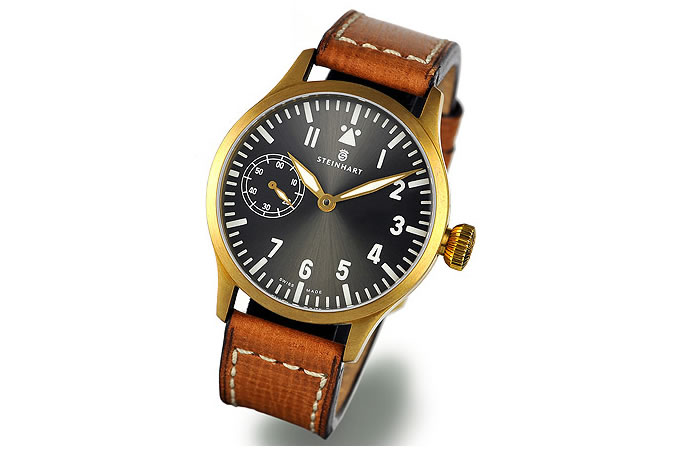 Bulgari bringa a bit of bling to its bronze game with this trend-bucker. It was one of the last designs by legendary watch-designer Gerald Genta. Rugged. Touch of art deco. Hands that look like Coca-Cola can ring-pulls.

Depending on your viewpoint, he’d either reached the apex of his illustrious career, or completely lost the plot. Either way, it will get you noticed. 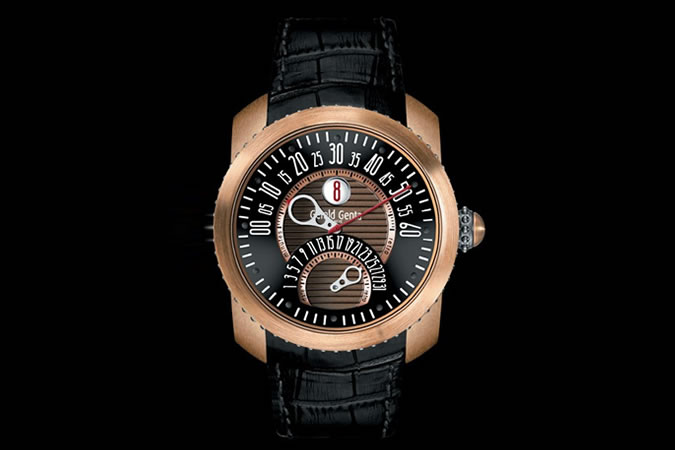